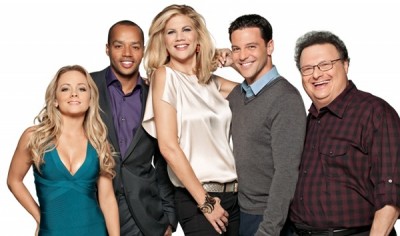 TV show description:
This comedic TV series revolves around three divorced men who share an apartment across the hall from their female divorce attorney and landlord.

Holly Brooks (Kristen Johnston) has never been married and is a top divorce attorney. While often playing matchmaker for her divorced male friends, Holly’s also recently single (having broken off an engagement) and struggles to meet the right man.

She’s also the landlord of an apartment across the hall from her own and rents it to her former clients and friends. Holly’s newest single client is Stuart Gardner (David Alan Basche), a successful dentist. He’s recently divorced and is trying to get over his feelings for his ex-wife.

Stuart moves in with two other divorcees; Phil Chase (Donald Faison) and Haskell Lutz (Wayne Knight). Phil is a sports agent and a womanizer. While seemingly focused only on his own interests, he often reveals a sensitive and helpful side. Haskell is a lazy, sardonic man who makes a living selling various items on the Internet and was once a professional bowler.

Things get off to a shaky start for Phil and Haskell when they begin to have reservations about living with clingy Stuart, but Holly is right across the hall to help them steer clear of any catastrophes. Meanwhile, Holly’s hard-partying assistant Eden (Kelly Stables), doesn’t let her professionalism get in the way of prying into her boss’s personal life.

As time progresses, the guys begin to realize that the issues they have with each other are the same ones that they had with their ex-wives.

What do you think? Are you a fan of The Exes TV series? Do you think it should have been cancelled or renewed for a fifth season?

Please get rid of Leah Remini!Did not watch KOQ or any other show she had been on.She is not funny and adds nothing to any show.I watch the Exes but fast forward through her scenes.If she comes back for another season I will probably give up on the exes as she is more than I care to watch.

Get rid of Leah Remini. I stopped watching as soon as she came onto the show. The original cast was great. I will not watch it again until you return to the original cast.

Just started watching this series on Hulu+ and I love it…introduced it to my husband who generally just watched documentaries/history shows and he was rolling laughing at this show! We love it!!! I hated Haskell’s character on Seinfeld but this show is an awesome dynamic 🙂

One of the few shows I truly look forward to watching. Can’t wait for the season to begin!

Don’t cancel the Exes, we need more from this great comedy team

This show is so awesome! Plus its incredibly funny! The cast is great and come together well. I been waiting for it to return but haven’t heard anything? I’m hoping and praying this comedy is not canceled. It would be very disappointing! Please keep this on the air! Its one of the few that are good.

Any word on this show? I saw that Donald Faison is on a new show now, I hope this one is still going to come back with him on it. This was the funniest show on TV Land!!!

It’s coming back in June: https://tvseriesfinale.com/wp-admin/edit.php?tag=tv-land-tv-shows-canceled-or-renewed

Please don’t cancel this show, this one is very good

LOVE this show & I’ve been waiting for it to return!!!

Love this show. every person on this show is excellent. It is one of the funniest shows on tv. I record all the episodes so when i need a laugh, i go to this show,very fuuny, please renew.

We love this sitcom, it keeps you laughing. I also got on the computer to see when it was going to start. Please don’t cancel!

My family has always liked it. I’m searching the web because we can’t find it this year.

[…] week marks the end of the second season of The Exes on TV Land. How’s the show been performing? Will it be cancelled or renewed for a third […]