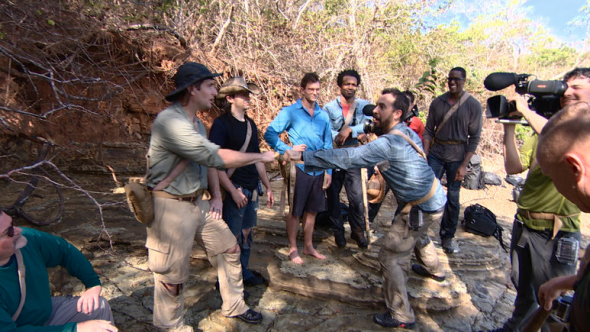 Airing on Monday nights, NBC’s The Island TV show is all about survival — but will this new series survive the ratings race? Should it be cancelled or renewed for a second season?

Hosted by Bear Grylls, The Island features 14 American men as they try to survive on a deserted island without the luxuries — or even the basics — of contemporary everyday life. Unlike other reality shows, there are no prizes, no eliminations, no winners, and no camera teams. Everything viewers see has been filmed by the men themselves.

The ratings for The Island haven’t been very good, especially when compared to lead-in American Ninja Warrior — which is averaging 1.97 in the demo with 6.57 million viewers. On the positive side, it seems to have a devoted (albeit small) audience because the numbers have remained pretty consistent.

Based on the ratings, it doesn’t look like NBC has any reason to renew The Island for a second season. However, it’s not inconceivable that they could bring it back for another short run next summer.

But, what do you think? Would you watch a second season? Should NBC cancel or renew The Island for season two?

Yes, renew it. Loved it!

Renew the show. It was actually a good show and most of those guys had a true life changing experience