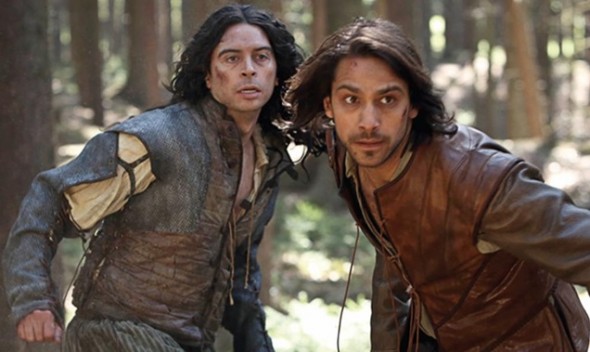 The adventures of The Musketeers will continue. Though BBC has cancelled Atlantis and In the Flesh, the broadcaster has decided to renew The Musketeers for a third season. The program airs on BBC America in the United States. Three episodes of the second season have aired on Saturday nights so far.

Director Andy Hay broke the news this weekend on Twitter, saying that season three will begin filming in the Czech Republic in April.

BBC followed that up with an official announcement: “The Musketeers has delighted audiences at home and around the world and we’re thrilled that we’ve been able to financially support bringing a third series to the BBC, with improved value for the licence fee payer.”

What do you think? Do you like The Musketeers? Do you think that it deserved to be renewed over some other shows?

Happy Happy Happy for season 3! Love The Musketeers! All in our family, from grandmother to granddaughter are delighted they have been renewed again. Would love to see this series last even longer. Great cast, even though we don’t like the count, we will stay loyal.

I am shaken with gladness that the Musketeers has been renewed for a third season and I can’t wait for the third season. I hope that the third season is a bit lighter and happier than the second season has been. Don’t get me wrong I have enjoyed the second season but to me its been very dark. The count seems to be holding all the cards and I don’t like it. How do you expect the Musketeers to defeat him if he has the love of the King and the Queen. Their is no balance at least from w… Read more »

I miss the lightness of Season 1…I’m finding that season 2 is too dark for me at this time!

The Musketeers offers the perfect combination of drama and humour. Witty dialogue, exciting duels, sword fighting – great character development – good story lines – this tv program has it all.
The creators have the perfect recipe. Great cinematography, excellent location, superb actors, very smart writers…it all cooks up some great fun for people of all ages.

I’ve just finished watching the first season on Netflix Canada and look forward to season 2. Needless to say, when I found out season 3 was a go – I was a very happy fan!

I am a great fan of the The Musketeers & Santiago Cabrera. So pleased that
there will be a 3rd Series. Great News!!

I am so excited, this is my favorite show. So happy it will be returning for a 3rd season. Sending lots of love all the way from Canada 😀

Absolutely thrilled to hear that The Musketeers will have a season! Love show, love the adventure and the drama with some clever comedy thrown in. Thank you BBC!

Fantastic news!! We all love The Musketeers and can’t wait for new adventures, but please put it back where it belongs on a Sunday evening. It does not belong on Fridays, and stop bumping it for sports (grrr!!) There is nothing more annoying than having your favourite drama suspended for a fortnight to make way for rugby and football. Stop it, BBC!

We love the Musketeers! Costuming and story lines are always intriguing! So happy season 2,has begun and that series is renewed for another season as well!!!!

Anything from BBC is often listed on DirecTV as ‘repeat’ when it is the first time it has come on whatever station it is on, and it’s the same for online TV listing sites. I missed the first season because of this and hate that. Wish they could do a better job on BBCA and supplying listing sites, Grr!

I feel in love with show but, the ones have been playing and playing. Good to get some episodes . Will be wonderful! Thank you BBC.

I am a big fan of The Musketeers. I am happy to hear that series is renewed for a Third Season. This one of my favorite shows on BBC America.

I watch every episode of the Musketeers. I the period it is shot in and the story lines are good. RENEW , RENEW, RENEW!!!!!!!!!!!!

Love love love the musketeers. My all time favorite show