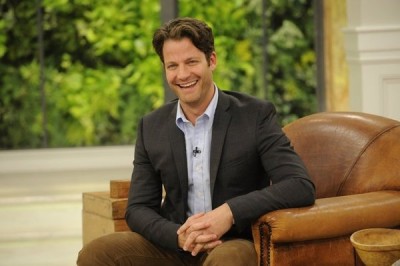 Love, love, love Nate! Am so sad that he has been canceled and keep hoping I will see that someone else has picked him up for a new show. He has so much talent!

I just found out his show was canceled. It was my time to just chill. I really enjoyed the design segments, house proud and his just being charming. I don’t watch a lot of TV so this really sucks. It seems like there is a vast wasteland out there and they keep cancelling anything WORTH watching. Good luck Nate.

We love you, Nate! You have to come back to tv. . . But on your terms, doing what you do best . . . Design! Perhaps seeking out another network would be a better fit. We have soooo appreciated you and all you have given us! Thank you, Nate!

I am SO disappointed Nate’s show has been cancelled. This was my only source and inspiration of design ideas. While magazines have great photos, Nate took the time to explain design concepts in an easy to understand way, he’s so charming! But I agree with the above comment about the ‘fluff’ segments that the show was getting into, I think is why the show didn’t get more viewers and even loyal ones like myself tuned out during the celebrity/games/fluff stuff when it was on. I truly don’t know where I’m going to turn now that the show is done!! Nate,… Read more »

I really get what Nate is feeling about the intensity of the assembling a show on an every day basis. I do, however, feel that this show could do no wrong. I was enthralled by Nate and this show every day M-F. I wish that somehow, some way, that he could return to television even if it is just a weekly show. So many of us out there need this particular outlet to motivate us and to get our creative juices flowing. What is life without design and the homey things that go along with design. Nate gave it all… Read more »

I will surely miss the Nate Berkus Show! In particular, the redesignated furniture
pieces and architectural elements. Also, the goodwill hunting and house proud segments.
Such wonderful imagination and creativity! Thank you for two great years, Nate!

I will miss the ideas, and his personality. A fun way to approach design, no pressure, just enjoy it…..I will miss you Nate….

I understand where Nate Berkus is coming from. If Nate sticks with what he really knows, which is design, his show could have stayed on for many seasons. Since he said that he will not do daytime television ever again, does it mean that we may not see him on television again? I hope that we do see Nate Berkus again on a television interview talking about what he is doing now after his show had ended. I seen his last episode and it wasn’t the series finale I was hoping for. I thought he would have a decent finale… Read more »

What a shame to take Nate Burkus off the air. I too liked his casual attitude and his unschooled talent for putting a fabulous looking room together. There are so many other programs I would have cancelled before Nate. I’m so tired of watching House Hunters on HGTV and a lot of other boring shows. Don’t give up Nate, we Minnesotans never quit, we always survive. See you at the state fair.

I love his show so much. Please pick him up as the same show or another one!

I loved the DESIGN part of the show but, for me, it just became too muddied-up with extraneous content. I believe THAT’S why the viewership didn’t grow. I wish Nate would have just stuck to what he does best. There are already plenty of cooking shows and I really don’t need to see non-chef celebrities pretend to cook. Kathie Lee? Elmo? Please. Celebrity interviews that have nothing to do with design, fashion makeovers – all done better elsewhere. My most hated segments – the ridiculous and insipid “games” – a guaranteed fast-forward. On the other hand, I have archived many… Read more »

I love the Nate Berkus Show. It is the only day time show I watch. You learn from him and get inspiration for changes and restoration of furnishings for the house or apt. I love the diversion to food creations, and fashion. I love his down to earth attitude and just being himself and real. No phoniness. Down home boy. I could not believe it when I read this article after trying to find his show this morning. I hope someone rethinks this issue.

I miss the show so much and its only been ONE DAY. Nate was excellent in what he did. Not only did we learn so much but his guests were so interesting talking about things that so many of us are interested in. I disagree with Nate. I think his show was fabulous and there was so much to learn from him. Couldn’t he get on HGTV and perhaps then split the show with a couple other designers? (like Design to Sell but a different format) Most of us got so attached to him with his great and funny personality… Read more »

I TOTALLY DISAGREE. NATE IS FABULOUSLY TALENTED AND VIEWERS GAIN A ALOT FROM HIS TALENTS OF DESIGN FROM THE RICH TO THE APT.GOERS. NATE SHOWS HOW TO ECONOMIZE OR TO EXPAND, VISUALLY. HE STRETCHES OUR IMAGINATION. AMERICA NEEDS HIM..TO ME IT’S A SAD GOOBYE…