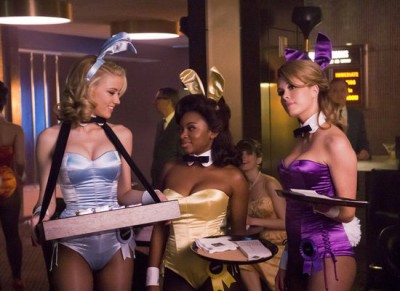 Last night, NBC once again tried to find a successful drama to air at 10pm, opposite Hawaii Five-0 on CBS and Castle on ABC. They haven’t found it in The Playboy Club.

Per the fast affiliate ratings, the stylized drama debuted to a 1.6 rating in the 18-49 demographic and just 5.15 million viewers. It was in a distant third place to Hawaii Five-0 and Castle which essentially doubled NBC’s numbers.

Last season’s Chase, which ended up being cancelled, premiered to a 2.3 rating and 7.31 million viewers in the same timeslot (per the finals). That’s a loss of 37% year-to-year in the demo.

Essentially, The Playboy Club is dead on arrival and it’s only a matter of time before NBC cancels the TV show. This could easily be the network’s first cancellation of the season but we’ll have to wait and see how the rest of the network’s new shows do.

What do you think? Did you watch the first episode of The Playboy Club? Do you think it should continue or just be cancelled now?

Great show, brought back lots of memories, hope it succeeds, but think it needs a more mature audience then gameshow NBC can offer, maybe Bravo?

Do NOT cancel it!! The playboy club is awesome! Smrt, thrilling and funny! What’s not to like 😀

I think at the end of the day, I havent really sat down and watched the show, I just can’t get really excited about it , My girlfreind is sexy so I see a beautiful naked woman every night , so what else does the show offer

The kind of people who like half naked girls are typically the same kind who like to watch jocks try and kill each other aka Monday Night Football. Castle and H50 are not the competition. MNF is. I dvr’d the show and found it entertaining………..

I watched the show and I have to say that I absolutely loved it. I look forward to the next episode.

Hmmmm….The Playboy Club with no gratuitous topless women or even guys smoking, and the writers go with the ol’ murder plot similar to the 5,887 crime-solving shows? I don’t think so.

Again, I ask…who are you people that are trashing all the new TV shows. For heavens sake, give them a chance! Loved Playboy Club!

Is Hugh Hefner connected to the show since he owns Playboy? I expect him to be a guest star sometime in the future (unless it is cancelled before the third episode).