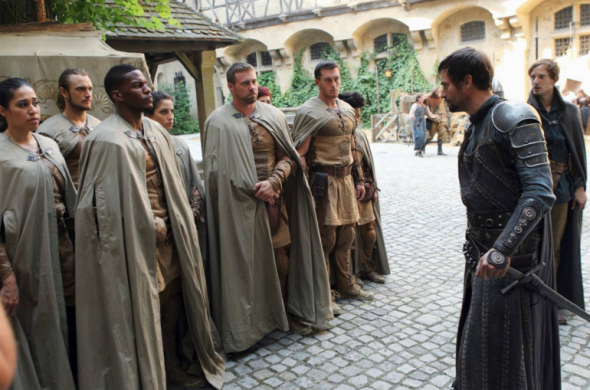 ABC hasn’t had much luck launching a new reality show in quite some time so they tried something different this time — The Quest. Is it a ratings success? Will it be renewed for a second season or, will it be cancelled instead?

The show debuted at the end of July to a 0.7 rating in the 18-49 demographic with 2.82 million viewers. It was a very poor start — even for a summer series — and the numbers have gotten worse as the weeks have gone by.

The season currently averages a paltry 0.5 rating in the 18-49 demographic with 1.96 million viewers. That’s worse than Sing Your Face Off, a celebrity reality show that was burned off on Saturday nights in June.

To be fair, The Quest has had to compete with football games in some markets and has also been preempted by games on some local ABC stations. The ratings are still very, very low however and the network knew that the series would be interrupted when they scheduled it — a sign that they probably had no faith in it.

In the end, it’s highly unlikely that ABC will want to take a chance on ordering a second season of The Quest.

But, what do you think? Do you like The Quest TV show? Do you think it should be renewed for a second season or should it be cancelled instead?

I loved the quest and watch the episodes over and over. Please don’t dicount it.

Please bring The Quest back for another season. I loved the first season so much I watch it over and over again on On Demand. However they skip episode 6,8 and the final episode. Please, please bring back another season.

I had never even heard of this show until I met Shondo at Indy Popcon. He is a delightful human being, but afterwards I went home and watched the whole series OnDemand. Me and my wife really enjoyed it.

I loved the show, and I am so glad that it came onto netflix or else I would have never being able to experiance it. I love how they mixed reality with the story plot of fantasy. Please have a sequel! I would deffinatly buy it to see!

Absolutely LOVE this show. Like so many others, I had no idea about it until it showed up on Netflix, but it’s such a great show. It needs a second season badly. If ABC won’t pick it back up, maybe the producers should pitch it to Netflix itself. SOMEONE needs to pick this show up.

One of my favorite shows in a long time. Definitely renew!

I agree! It really didn’t have enough advertising while it was showing on ABC. I was lucky enough to be able to see it while on Netflix if not I would have never have known about it. It should definitely get a
2nd season! I personally loved it!

I knows it’s a corny premise, but the acting, costumes, setting and challenges looked SO fun and the people so great as characters, I couldn’t stop watching. Pick a new time slot, but please keep it going!

I loved it. I truly enjoyed watching this show. I believe it is the best hybrid show for anyone to watch. It made me believe more in myself and to see more. If I could I would love to give it a try and at least say I’ve been there and did that. It is a great show to help people to believe in the unbelievable, even in themselves.

I think damn well this show should be renewed! I think the only people who would rate it bad would be someone that didnt see it from the beginning, or didnt buy into the “fake/fantasy” aspect of it. Yeah theyre actors, but theres a high nerd demographic that totally loves it!

I loved it. The show made me really believe in myself. I loved watching it and it left me wanting more. If I could I would try my hand at it just to say I had been there and did that. Great show.

This was such a great show and probably the only reality show that I have watched that i would want to be a contestant. The really great thing is there was more heart in it and less i’m here to win. The challenges don’t just stop when there is a winner and they go back to help the ones falling behind because deep down everyone wants to be a hero and this lets people live that dream. Found on Netflix like everyone else and hoping we can have a season 2.

Awesome show! Like a lot of others, I had no idea about this show until it showed up on Netflix. Started it last week and just cried my eyes out watching the one true hero finally emerge. Every person whether nerd, athlete, plain Jane, or the joker wants to be a true hero. Such a great premise for a competition show and so unique! There NEEDS to be a second season!

you said it so well. i hope they renew it.