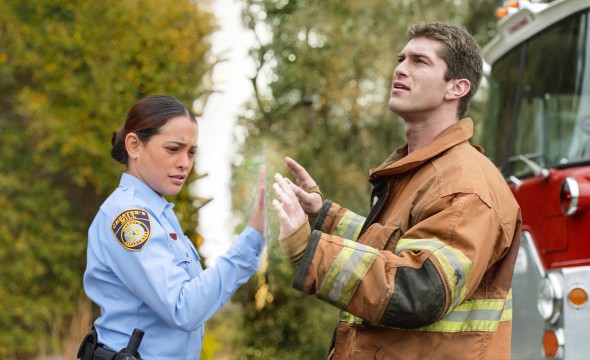 CBS has picked up their successful new summer drama Under the Dome for a second season of 13 episodes. They’ll debut next summer.

The first season of Under the Dome is currently airing and the season finale will be broadcast on September 16th.

“UNDER THE DOME” RENEWED FOR SUMMER 2014

Stephen King to Write the Premiere Episode for Season 2

UNDER THE DOME, television’s #1 summer series in viewers and key demographics, will return in summer 2014 with 13 new episodes, it was announced today by Nina Tassler, President, CBS Entertainment.

Stephen King, whose bestselling novel is the basis for the series, will write the premiere episode of the second season.

“We’re excited to tell more stories about the mystery of the dome and the secrets in Chester’s Mill, and are thrilled to have the master storyteller himself, Stephen King, tell the first one of next season,” said CBS Entertainment President Nina Tassler.

UNDER THE DOME is a serialized drama from Steven Spielberg’s Amblin Television based on Stephen King’s bestselling novel of the same name. It tells the story of a small town that is suddenly and inexplicably sealed off from the rest of the world by an enormous transparent dome. The town’s inhabitants must deal with surviving the post-apocalyptic conditions while searching for answers to what this barrier is, where it came from, and if and when it will go away.

UNDER THE DOME is averaging 13.84 million viewers, 3.5/10 in adults 18-49 and 4.8/12 in adults 25-54. In addition to impressive live plus same day ratings on CBS, the series has also seen significant additional viewing on DVR playback, video-on-demand and online streaming – including Amazon’s Prime Instant Video, which provides exclusive online subscription streaming four days after the broadcast on CBS. Amazon says that since the show’s launch, UNDER THE DOME has been watched by more customers than any other series on the service.

What do you think? Are you a fan of Under the Dome? Are you glad that the show was renewed for a second season or do you think it should have been cancelled instead?

I love this show. sorry that its taking so long to get to next season though. I will be wating . great plot ..love it.

Love the show but have to say was not happy to learn the end was not in the last show. I may loose interest in some other show or activity by then or just forget to record it.

THE DECISION TO WAIT A YEAR IS A JOKE!!! GREAT SHOW RIDICULOS SEASON FINALE. WONT MAKE IT ANOTHER SEASON BECAUSE OF IT

This is a great show, but it’s about time the planners of these tv shows thought about reincarnating the mini-series which had a conclusion instead of leaving the viewer hanging in hopes of a second season. I remember watching Lost In Space as a kid, wondering if the Robinson family would ever get back to Earth, of course, I never found out. As for the dome – will it, won’t it? Please, not another Lost In Space!!

Love, love, love the show! I’m thrilled that it is being renewed for another season! Just don’t look forward to the wait! I’m HOPING that the season 1 finale will have some level of closure and not have a frustratingly suspenseful cliff hanger. :-0

I like the show, but am not happy that we will have to wait a whole year before it comes on again. It’s bad enough we have to wait through the summer to see the outcome of regular shows. Like Lost and 24, viewers will lose interest if TPTB wait too long, like a year, to broadcast.

My husband and I just love this show. It reminds us of Lost where each episode keeps you riveted to the TV anxiously awaiting next week’s episode. I have to admit that I would like to see Big Jim gets what he deserves.

I have taped every episode in order to have it from start to finish. Now there isn’t going to be a finish! What is the point. I thought it was to be like the book, not exactly, but have a start and a conclusion within these 13 weeks. Being so careful to make sure I remembered to tape it every Monday night was just a waste of time. I want to see the conclusion at the end of the series 13 weeks!

It’s going to be another LOST, starts out good and then goes downhill from there
and by the time there’s barely any viewers left they have no idea how to end it
and just slap some crap together and broadcast it.

This has been a great new show. But it should be put in the regular prime time season not a summer replacement show. Maybe they could put it in as a winter fill in for a cancelled show!!!!!

I agree with OleVizer. I thought this was a mini-series of the book, and would therefore have a conclusion. I was also interested to find out what this conclusion would be because they said it was different from the book’s ending (which I found silly). I think if I knew this was going to be a series, I wouldn’t have bothered watching it. The book had a story that progressed and a finite period of time before the story had to end (I won’t spoil it for those of you who haven’t read the book). I think it’s just going… Read more »

I’m with you Christine! I thought it was a mini-series and Monday night’s show was the finale; instead they’re planning to bring it back next Summer. By then, I won’t be interested! I think they should have kept it as a mini-series. Dragging this on til next year is not cute! Oh, well…NEXT!!!

I don’t agree at all. We also thought it was ending as a mini-series but are thrilled that it’s coming back. It’s so much more entertaining than watching all the summer repeats. It was just a cliffhangar just like the winter shows. We will be watching the second season for sure.

The “winter” shows usually last through April or May and then you only have to wait until September or October to see what happens. Summer to Summer is a bit too longl.

What happen if “Under The Dome” ended after 13 episodes this summer? Would there ever been an official conclusion? The producers must have filmed an alternative ending just in case “Dome” bombed. This is similar for to what “Jericho” did when season 2 turned out to be its last. They has 2 endings — one to end the series and the other to continue.

I like the show can’t wait to see what happens next!

Not sure how I feel. I thought Under The Dome was a mini-series; with a beginning and an end. Feel like it’s just going to dragggg out now and worse get cancelled before we get a satisfying conclusion to the story

Read the book if you want a conclusion.

If the show’s conclusion is going to be different from the book’s conclusion then reading the book won’t help viewers of the show; like how AMC’s the Walking Dead doesn’t have a lot in common with the book series it’s based on.