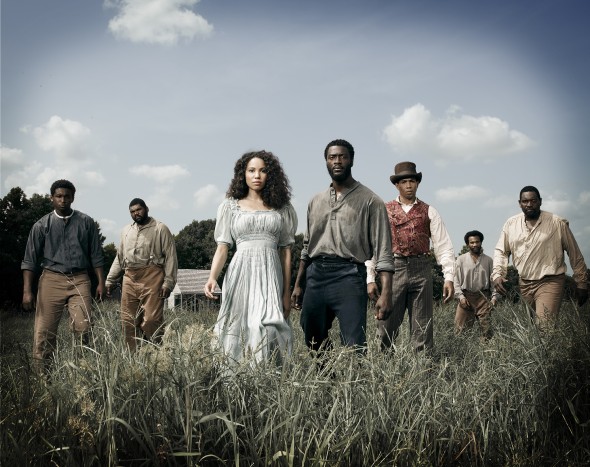 TV show description:
Set in 1857 Georgia, this antebellum historical drama thriller features the heroes of the Underground Railroad who used everything within them to escape bondage and live as free men and women.

Noah (Aldis Hodge) is a blacksmith, who keeps his own counsel. It is he who organizes fellow slaves and develops an escape plan that will take them on the long journey to freedom. With the odds stacked against them, can he lead the group on this treacherous 600 mile journey north?

Noah is in love with the young, bashful Rosalee (Jurnee Smollett-Bell) — a house slave to the Macon family. She has not experienced much of life, particularly not off the plantation. While she had never before considered running, a brutal incident awakens something within.

Her mother and head house slave, Ernestine (Amira Vann) is a savvy woman, who does whatever it takes to safeguard her family. She shares a connection with August Pullman (Christopher Meloni).

A Mexican-American war veteran, Pullman is trying to make a life for himself and his son, as a farmer. A complicated man, he struggles to find his moral compass and to put food on the table.

Moses (Mykelti Williamson) is the slaves’ preacher. He works to discern if it is God’s will to risk his family in an attempt to free them. He is married to Pearly Mae (Adina Porter), who first inspires the group to escape.

John Hawkes (Marc Blucas) is an abolitionist lawyer, dedicated to the cause of freedom. Despite his profession, he answers to a higher law.

His wife, Ohio socialite Elizabeth Hawkes (Jessica De Gouw), shares her husband’s convictions. Still, she is afraid of the consequences their commitment to the cause could bring.

A clever man, the fearsome Cato (Alano Miller) is a larger-than-life presence on the plantation. His fellow slaves loathe this assistant overseer.

A plantation owner with political aspirations, northerner Tom Macon (Reed Diamond) longs to become a true “man of the South.” He is married to Suzanna (Andrea Frankle).

Sizable and strong, Zeke (Theodus Crane) is a mighty man with hidden agonies. Sam (Johnny Ray Gill) is Rosalee’s half brother and a gifted craftsman.

Although young and restless, Henry (Renwick Scott) has a good heart. He is devoted to his hero, Noah. A runaway, Josey (Jussie Smollett) has learned the hard way not to trust anyone.

What do you think? Do you like the Underground TV show? Do you think it should have been cancelled or renewed for a third season?

One of the best shows ever. Please bring it back on another channel. the acting was fantastic.

Please bring the show back. It was excellent.

I thought this show was excellent! Most realistic & historically accurate. Very relevant since schools aren’t teaching much about U.S. History during the Civil War. Please bring this show back.

This was one of the best shows on tv, it was educational, historically accurate and relevant in a way most shows aren’t! Please bring this show back it deserves to be on the air and to be seen!!

I LOVED underground. It is the first time I saw slaves portrayed as true three dimensional characters. The acting is superb and the storylines really grab you. I really hope it comes back. If not here, then some other network.

Underground is an interesting and enlightening TV show. I certainly wish it can be renewed. I had learned these character’s names and looked forward to continuing the journey with them. So sad to cancel this show.

I was curious about Underground’s 3rd season. I had no idea the show was cancelled! It was a really good series with a great cast of stars!

Definitely want to see more! At the least, one more season, but it could go on for more that that. Great show, very well done!

MY VOTE TO BRING IT BACK!!!! LOVED THIS SHOW!!! I was looking forward to seeing a new season!!!! Its sad that it was cancelled just as it was getting to the next chapter after they found their freedom and how they managed to establish themselves and see them going on to doing great things in America! Even through the struggle of them fighting to be equal after being a slave.

I’m devastated by this news. I’ve been searching on my cable box to make sure the series is recording and could find it!!!!!! Why was this show cancelled?! This show was awesome and I was looking forward to the next season. MUST bring this show back.

Such a good show and wonderful actors, Something one can learn values from. Please bring back the Underground

PLEASE BRING UNDERGROUND BACK, WE REALLY MISS THIS SHOW!!!

This show should have never been cancelled it was a great history show for those who know nothing of the struggles of African Americans……it’s a disgrace that we don’t have more of these shows on tv.

loved this show ! shouldn’t have never been cancelled hope they bring this show back! season 3 I’m ready!

We loved this show. Please bring it back for many more seasons.