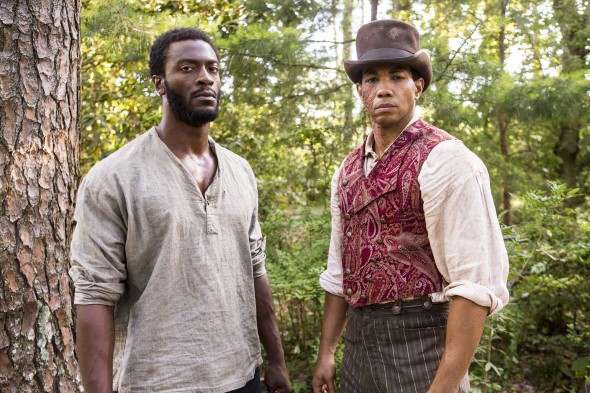 WGN America has renewed its Underground TV series for a second season. The historical thriller drama about the Underground Railroad, created by Misha Green and Joe Pokaski, airs Wednesday at 10:00pm ET/PT on WGN America. WGN will air a full first season Underground marathon, before the Underground season one finale, Wednesday, May 11, beginning at 1:00pm. Check your local listings.

Get more details from WGN America.

Full-Season Marathon to Air Before the Finale, Wednesday, May 11

Los Angeles, April 25, 2016 – WGN America’s Underground Railroad thriller “Underground,” among the most widely praised series of the year and the network’s most-watched original program ever, has been renewed for a second season, it was announced today by Matt Cherniss, President and General Manager, WGN America and Tribune Studios. The breakout hit series, created by Misha Green and Joe Pokaski, draws 3 million Total Viewers on Wednesday nights season-to-date in Live + 7 delivery, lifting an average of +131% in time-shifted viewing among Adults 25-54, and is the #6 highest-rated scripted series premiere of any cable drama this season. “Underground” was the #1 original scripted series on cable last Wednesday night across all key demos in Live + 3 ratings.

“With enormous pride we are announcing a second season of ‘Underground,’ a series that has resonated with so many passionate fans across the country,” said Cherniss. “We are deeply proud of the work that the talented cast, crew and production team have done to bring this story to life, led by our gifted creators Misha Green and Joe Pokaski and our partners at Sony Pictures Television. It is an honor to have ‘Underground’ on our air and we look forward to how the story will unfold in what is sure to be a stellar sophomore season.”

John Legend said, “‘Underground’ isn’t just a television show. It’s a movement. It is storytelling at its finest, and the brilliant work that Misha, Joe and our cast have done to infuse Underground with the kind of passion that’s made it part of the zeitgeist is incredible. This show does so much more than entertain, it inspires us to reflect on our past and learn from those mistakes to make a brighter future for our children. Thanks to everyone at WGN America, Sony Pictures Television and my Get Lifted partners Mike Jackson and Ty Stiklorius for putting their hearts and souls into ‘Underground.’ We look forward to a spectacular season two.”

“We’re tremendously proud of this series, from Misha and Joe’s powerful and unflinching storytelling, to John Legend’s heart-pounding soundtrack and creative contributions to the breakout performances of our gifted cast,” said Zack Van Amburg and Jamie Erlicht, Presidents of Programming and Production, Sony Pictures Television. “It’s been gratifying to see the audience for ‘Underground’ grow each week, and we are looking forward to continuing our partnership with WGN America to bring viewers more of these thrilling stories of courage, pain and heroism.”

WGN America has kicked off its For Your Consideration Emmy campaign for “Underground,” which includes print, online, social media and out-of-home ads, as well as on-air promotion and a dedicated screening room for Academy of Television Arts and Sciences members to view the series’ full first season across multiple devices. The network is also providing DVD screeners of “Underground” to the Academy’s entire 18,000+ membership body, and recently hosted a special screening event for members.

“Underground,” which was screened at the White House in February, boasts a large and loyal fan base that live tweets the series each week, along with the cast and creative team, making “Underground” the #1 most social cable drama on Wednesday nights. The series trended worldwide last week, on the same day the U.S. Department of the Treasury made its historic announcement that abolitionist and humanitarian Harriet Tubman, who led many enslaved people to freedom on the Underground Railroad, will appear on the face of the $20 bill, a decision lauded on social media by the cast and creators.

“Underground” has broadly garnered raves, including this small sampling of recent press:

In the newest episode of “Underground,” entitled “Grave,” airing Wednesday, April 27 at 10:00 p.m. ET/PT, the Macon 7’s perilous escape route to freedom takes them to Kentucky where they are met with suspicion by the local authorities. The finale will air Wednesday, May 11, preceded by an all-day “Underground” marathon for fans to binge-watch the entire 10-episode first season, beginning at 1:00 p.m.

Set in a desperate and dangerous time, WGN America’s “Underground” tells the story of revolutionaries of the Underground Railroad who use their ingenuity, will and power to attempt the greatest escape in history despite the dire consequences that awaited them on the other side. The provocative and compelling series focuses on a group of courageous men and women who band together for the fight of their lives—for their families, their future and their freedom.

The season two order for “Underground” comes on the heels of WGN America renewing “Outsiders,” another hit series in its growing stable of high-quality original programming. The network’s popular original series “Salem” returns for a third season Halloween week.

What do you think? Are you a fan of the Underground TV show? Do you plan to watch the second season? Tell us.

Its a beautiful show and loved the first season but cant seem to find the second season debut,,,could you post the times and channels ,,,THANK YOU

Yes, I tried to watch this series every Wednesday night. I work long hours and usually don’t watch tv except on the weekends and holidays. I am anxiously waiting to view the second season episodes.

I would this is one of the best shows I’ve seen in a long time. This show was recommended to me by a co worker who started watching it and I even told my family about this show who has enjoyed it as well.
Hope to there is a season 2 can’t wait to tune in.

I love this show. It does not glamorize slavery as some shows do. It tells it like it was.

Very glad it is returning soon. It is a terrific show!!!

I just heard of the show last week and watched the entire first season in three days. Can’t wait for the second season to begin.

I’m really looking forward for the next season of this show. Just hope that the background music isn’t so loud as I sometimes can’t hear what they’re saying.

Underground is by far the best show I have had the pleasure of watching. It leaves you wanting more and more. I need more underground.

I am so very glad that UNDERGROUND will go on. and this IMPORTANT PIECE Of American History will gave an even better viewing audience than the first part!

Undeniably the best eye-catching series I have EVER seen. Underground truly depicts history to a ‘T’. Underground is the best down-to-earth way to connect with the younger generation for them to truly gain an understanding of the slavery era. It is real, and extremely moving. However, I am saddened that my cable company has moved Underground to a channel I cannot get. Actually, it infuriates me. The move to the new channel allowed me to view the season finale, but then the channel was inaccessible after that. Underground ruled in our house when it came to choosing what to watch.… Read more »