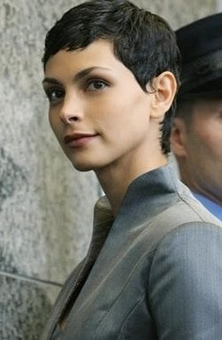 ABC has announced that season two of V will debut on January 4, 2011. Though slated for mid-season, network execs had previously indicated that the series might return as early as November. Despite having cancelled My Generation and having at least one other new series that’s also doomed (The Whole Truth), they’ve still opted to hold it back until 2011.

Last season, ABC put the V TV show on a four month hiatus while story and backstage issues were worked out. That hiatus was likely one of the main reasons that the ratings dropped off in the second half of the season.

Now, the network is hoping that the show can survive an eight-month break. Considering that the last episode of season one only attracted a 2.1 rating in the demo and 5.46 million viewers, the cast and crew certainly have their work cut out for them.

Simultaneously appearing over every major city in the world, the Visitors (or V’s) arrived offering us the wonders of their technology and promoting peace. While the world quickly embraced the V’s as saviors, an FBI Counter Terrorist Agent, and others making up the resistance group called The Fifth Column, quickly discovered that the Visitors are not who they said they were. Will humanity stop being fooled and realize the Visitors true intentions before it becomes too late and they take over Earth?

“V,” which received an Emmy Award nomination for Outstanding Special Visual Effects For A Series, stood as television’s No. 1 new drama during the 09-10 TV season in the key Adult 18-49 sales demographic, delivering substantial year-to-year improvement in both of its Tuesday time periods (8:00 p.m. and 10:00 p.m.). “V” finished No. 1 in both time periods among key Men (M18-34/M18-49).

Season Two will feature more character and lizard reveals, more details about the V’s mythology, while along the way featuring even more action and more plot twists. Viewers can expect a roller coaster ride week to week.

What do you think? Will V survive to see a third season?

I like “V” and hope the show will continue.

V..one of the best shows on TV…keep it going..on every level..very good acting ..writing..story..special effects..cannot wait for season three..great episode at the end of season 2…watch out for being off the air to long..I thought bad judgement on Lost,was that they jerked people around ,all the time, by being gone to long off the air..also good shows have been brought down by switching days and times to much..the people that make those decisions..should be watched and judged on some of those bad decisions…the public does not look at things the same as the people that are looking at these shows… Read more »

Great series. Lots of twists and turns that keep you on the edge of your seat. Myself and other members of my family cannot wait until Tues nights roll around. Please don’t cancel it…am tired of watching sci fi shows that are cancelled. It makes me not want to start watching them at all. I think all the actors are great. YOU MUST KEEP IT GOING SO WE WILL KEEP WATCHING YOU ABC!!!!

V is wonderful! I have loved every episode, it is a show that I watch with my niece and mother in law. I vaguely remember watching the original with my mom when I was little, but it is epic! We look forward to seeing what’s going to happen every week, and when we are waiting on a new season we rematch the old ones over and over. It is just unlike anything out there.

Let’s get back to good-ole’ ‘Movie Night” from 8-9:30 pm and 9:30 pm-11:00 pm. Since Episodes are becomig UNPREDICTABLE on episodes returning, i.e. Flashforward and Eastwick are canceled. Besides what else is there to watch other Reality TV.
How could it not get a higher Rating ? It has no real competition except for REALITY SHOWS!! People are getting burned out on reality shows. Sooo, V (Vistors is the only thing left to watch. I am starting to lose interest quickly! Mainly, I can already pridict the shows outcome.

I say get rid of the episodes airing every night! Let’s get back to good-ole’ ‘Movie Night” from 8-9:30 pm and 9:30 pm-11:00 pm. Since Episodes are becomig UNPREDICTABLE, i.e. Flashforward and Eastwick are canceled. Besides what else is there to watch other Reality TV. How could it not get a higher Rating ? It has no real competition except for REALITY SHOWS!! People are getting burned out on reality shows. Sooo, V (Vistors is the only thing left to watch. I am starting to lose interest quickly! Mainly as I can already pridict the shows outcome.

Do i want to see more of V? Yes definitely. Do i think the show is dragging? For some, it may, for some, it may not.. Laying a good foundation ensures a strong building.. similarly, the slow first season and medium paced second season with a fast paced 2nd season finale only ensured that V wants to keep and even lure more viewers. I haven’t watched the previous V show so i can’t compare.. but i would really like to see the third season. I am confident that V will improve its ratings it becomes fast paced.. Please keep the… Read more »

V is the most entertaining show on tv ! Please don’t take it off. It’s the only show I look forward too on Tuesday.

Horrible series, todays episode really shows you that this series is not going to last to season 3 or 4. Bad writing and horrible story. Coup de fail.

I hope that V will keep going. It is getting so good! I can’t wait for Season 3, and I hope there is one. I want to see an invasion! ^_^

Please keep V going. It is one of the best shows on Tuesday nights; followed by Detroit 1-8-7.

This is just more propoganda that will instill fear in the masses re extraterrestrials. The Catholic church comes off looking too good when in fact the churches and organized religions should be feared.