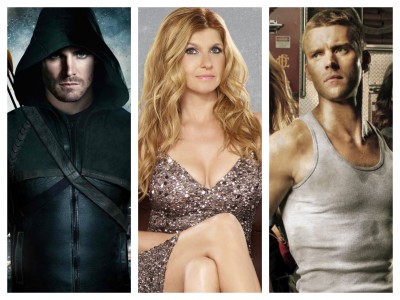 At 10pm, it was the series premiere of Nashville. That attracted a 2.8 in the demo and 8.98 million viewers. It was first in its timeslot in the demo but second in viewers to CSI.

At 10pm, NBC presented the pilot of Chicago Fire. It attracted a 1.9 rating with 6.4 million total viewers. It was last in its timeslot in both categories. Compared to last year’s Law & Order: SVU’s season premiere in the same timeslot, the network was down by 21% in the demo (vs a 2.4 rating) and down by 16% in viewership (vs 7.63 million). This certainly wasn’t a great start for this new series. On the positive side, almost everyone who started watching the pilot episode stuck with it until the end. That’s kinda rare these days, particularly for a 10pm show.

And on The CW, it was the series premiere of Arrow. Comparatively, this had the best debut of the night. It attracted a 1.3 in the 18-49 demographic with 4.0 million total viewers. Year-to-year, compared to H8R’s premiere in the same timeslot, the network was up by 116% in the demo (vs a 0.6 rating) and up by 210% in viewership (vs 1.29 million). This was a very promising start for the new series. It beat NBC’s Animal Practice in the demo which is impressive for tiny CW network and sad for the peacock.

Supernatural followed with a 1.0 rating (+25%) and 2.6 million. The venerable series certainly benefited from having a strong lead-in.

What do you think? How do you think the three new shows will perform for the rest of the season? What were you watching last night?

I feel like Supernatural is back on track. I agree Kevin, the last two seasons were bad. I was beginning to wish the show would be cancelled. To see such a consistently great show lose its way was saddening to me. But this season they’ve resolved the melodrama between Sam and Dean and are focusing once more on the gritty supernatural underbelly of middle America that made the show so iconic in the first place.

So The Arrow having a lower rating and 2.3 million less viewers than a show like The Neighbors, is considered a strong debut? Wow CW must have some weak standards. Sure, it preformed better than the dud they rolled out last year but come on, it did not do well. I haven’t watched it yet myself, still trying to get over the bad taste left by Beauty and the Beast remake.

Their strongest show by far, Vampire Diaries, had a 1.3 average demo rating and 2.8 million viewers last season. So far this season, CW shows have been getting 0.6 – 0.8 demo ratings. Yeah, they have different standards for success.

[…] CBS network offers their spin on last night’s ratings, with a particular emphasis on their own Survivor, Criminal Minds and CSI series. CBS WINS […]

I loved Supernatural. The new show runner got me interested in the show again. The last 2 season where kinda crap. I heard that it was going to be renewed through season 10 because Jeremy Craver has a 3 year plan …any truth to this. The ratings seem to be up from last year already.