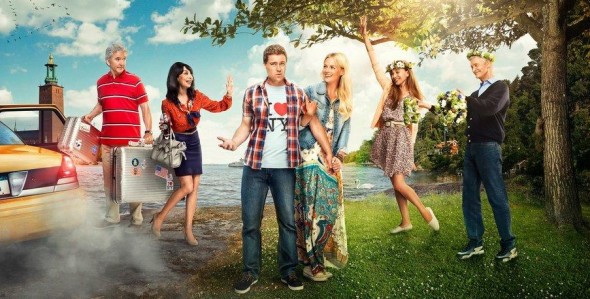 TV show description:
Based on events in the life of Greg Poehler, this comedy TV show revolves around Bruce Evans (Poehler) and Emma Wiik (Josephine Bornebusch), seemingly the perfect couple. He’s a successful money manager to the stars in New York. He lives with Emma, the sweet woman from Sweden whom he loves and adores. A rare combination of intelligent, funny, kind and beautiful, Emma believes she has finally found her true soul mate in Bruce.

After being with him a year, she makes the life-changing decision to move back to her native Stockholm to accept a prestigious banking job. She’s surprised and thrilled that he agrees to move with her to begin a new life together.

With no job, friends or any real clue about what he is getting himself into, Bruce is quick to face many unique challenges and culture clashes. The most notable one is how to win over Emma’s strange and very Swedish family.

They move in with her parents — Viveka (Lena Olin) and Birger (Claes Månsson). Viveka is a therapist who dearly loves her family but has difficulty showing it — especially to Emma. She also takes an instant dislike Bruce. Birger is a retired sea captain and is a typical Swede — tall, kind and silent. He doesn’t speak much English which only adds to the communication barriers.

Bruce’s parents are Wayne (Patrick Duffy) and Nancy (Illeana Douglas). Wayne is conservative by nature and resides in a small Midwestern town. Nancy wants nothing but the best for her son, but can’t comprehend his decision to leave his happy life in New York.

Series Finale:
Episode #20 — Sexy Dancing/Bröllopet
After watching a viral video online, Emma wants to have the wedding party dance into the church, but a problem arises in rehearsal. Gustav introduces his girlfriend to the family. Guest stars: Rachel Mohlin, Per Svensson, Amy Poehler, and Aubrey Plaza.
First aired: June 3, 2015 (in Sweden).

What do you think? Do you like the Welcome to Sweden TV show? Do you think it should have been cancelled or renewed for a third season?

Really, really like this show. Those who have not yet viewed it need to watch from the very first episode to really appreciate. My husband’s paternal grandparents were Swedish, so I can relate! Looking forward to their next season.

Great show I just finish to see this show in israel

I found each episode hilarious and was laughing at hilarious and totally out of place bruce constantly.He’a biscuit floating in chicken soup-all the while petending to be a Matzoh ball. Or maybe he thinks he’s toast and grated cheese on onion soup when really he took the wrong turnoff and he’s floundering in a puddle. I have no idea how the girl puts up with him. Seriously. In a real cross-cultural relationship,there has to be and enormous pull beyond physical attraction that welds the parties together. I’m not at all sure Bruce has the stamina. American and Swedish isn’t a… Read more »

Please bring this show back. I want to see Season 2

Hello, I live in Baltimore, Maryland of the U.S. but I am a longtime admirer of Swedish culture, language and women. I’ve been to Sweden twice and really enjoyed both visits. Too cold to stay there for long, though. LOL I do think it’s terrific that someone is doing a show about Sweden even though it’s not very good. The Emma character is fine but I find Bruce’s attitude toward her and the country rather obnoxious. From what I remember, the scenes of Bruce and Emma’s father in the steam baths were hilarious, really reminded me of the steam bath… Read more »

I love the show! I’m Swedish and now living in the USA. I was happy to hear from my sister who lives in Stockholm, that they are going to make 5 new episodes.

Hi Lena, That’s great news about the 5 new episodes! I just wish they would make the Bruce character more humble and with a better and more loving attitude toward Emma and living in Sweden. He doesn’t know how good he has it with her. Where in the U.S are you located? I am in Baltimore, Maryland and can’t find much to relate to Sweden here except the local IKEA store! LOL I am of German and English background so I don’t know where my interest in the Scandinavian (especially Swedish) culture comes from. Perhaps I was Swedish in a… Read more »

Hi Tom. I live in Connecticut, love it here even though the winters are cold just like in Sweden. When I go back to visit my relatives in Stockholm I usually get a good deal flying with SAS. They have lower rates after the holidays and early spring. So tell your girl friend to come and visit you during that time. The rates are lower booking from Sweden too during that time. About the show, I just like to add that I think Swedish people are a lot like that. It really makes me laugh! We are so serious and… Read more »

Hi Again Lena, When will the new episodes air in the U.S.? Will the first season be released on DVD? I felt that the show depicted too much drinking of alcohol by the Swedes. Having met a number of Swedish folks over there and here, I would say they don’t drink more than any other nationality. My Swedish girl Angel grew up in Kuala Lampur, Malaysia from a very early age. We spoke on the phone twice but now her service has been disconnected. She contracted typhoid and was in hospital for over two weeks, couldn’t work so now she… Read more »

I am swedish… Never saw the show when it was on TV, just saw it on netflix. Please keep it going!!! It is truly a direct reflection of swedish culture…lol!

How do you feel that the show is a direct reflection of Swedish culture?

I thought the scenes of the Swedish steam baths were both funny and accurate, but felt that there was too much drinking of alcohol on the show.

The scenes with Bruce trying to find a job and attempting to get a driver’s license were very funny.

However, I think the Bruce character should be more appreciative of his Emma and living in Sweden, which is a fine country.

Having lived in Sweden for just over a year I find it hilarious. I doubt the average American can relate at all. Perhaps the more educated American is able to relate so I hope the show can survive long term. The show is great and the characters are as well. Bruce is intensely irritating / annoying – somewhat unbelievable as a real life character.

this is a GREAT show! Very funny, witty, cute, creative, fun, lively, …I LOVE IT!!
Please keep it running!! there are so few good shows on TV.
Thank you!!!

Very funny in a subtle and clever way. I appreciate the LACK of a laugh track!
I really love this show….and there aren’t many sitcoms i can say that about.

Definitely love this show. Please keep it coming. My girlfriend and I watch it religiously.

The best thing NBC could do is to renew the show NOW!!!!. It is remarkably funny, intelligent and insightful into a culture I knew little of. Greg P is just as funny (maybe more funnier) than the Sis.

This shows writing is quite good. Funny & romantic, it alows People to see what it’s like to actually put the one whom you Love first . Offering lots of humorous situations between our two different cultures . No one can feel offended. All of this this with a fair amount of wit in the dialog. If this show doesn’t make it, it will be no fault of the cast, or crew. But rather the people at the network . They just don’t seem to know how to promote much other than crime shows . I wish all the people… Read more »

I love this show! Please keep it. I am from Sweden and married to an American man. Me and my husband think this show is hilarious. It is also so nice to see that they filmed it in Stockholm where I grow up. I really like how they joke about us Swedes and how serious we can be. I have to admit that it’s true! We are kind of weird sometimes. But to my defense I must say we are very honest and nice people.