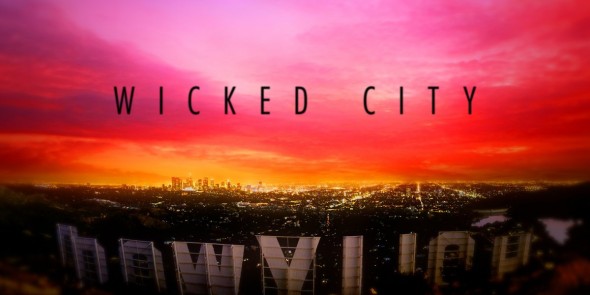 TV show description:
This crime anthology follows cases set during famous and infamous moments of Los Angeles history. The first case is set on the seedy Sunset Strip of the early 1980s. Amidst the sex, drugs and rock ‘n’ roll, a sinister someone stalks sultry starlet-wannabes.

Kent Grainger (Ed Westwick), in the guise of a Hollywood bigwig, trawls the clubs, making empty promises of fame and fortune to pretty young things. Once he dedicates a song to a woman on the radio, her days are numbered.

Kent meets his match in Betty Beaumontaine (Erika Christensen), a single mother who supports her family working as a nurse. Tantalized by the prospect of drawing his lover into his twisted, secret life, will Kent coax Betty into being his perverse partner on his killing spree?

Detective Jack Roth (Jeremy Sisto) and his new partner Paco Contreras (Gabriel Luna) are on the case. Their partnership is an uneasy one, though. Paco is responsible for getting Jack’s former partner thrown off the force. This is not Jack’s first newsworthy case, and he’s made many contacts during the course of his career. Cops, reporters, dealers, and clubbers form a team of rivals, to catch the killer terrorizing the Strip.

As Kent preys upon the innocent, Jack and Paco decide that when it comes to catching this killer, the end justifies the means.

Jack is having an affair with Detective Dianne Kubek (Karolina Wydra), who is on an undercover assignment at a strip club as cocktail waitress/drug dealer. As the bodies pile up, the tension between Jack and Dianne’s personal and professional relationships escalates.

Karen McClaren (Taissa Farmiga), is a rookie reporter who covers the Strip and witnesses one of the victims leaving a club. Karen is approached by killer Kent and unwittingly gives him her phone number. Jack and Paco eventually use Karen as bait to lure the killer out of the shadows. Now they must keep her alive.

What do you think? Do you like the Wicked City TV show? Do you think it should have been cancelled or renewed for a second season?

Love the show mad it’s gone at least let me see all 8 episode that were taped. It’s like giving a person that’s starving food and after 3 bites you take the food tell me there 8 bit total to have but you can’t have them.

Bring it back! Great cast & storyline.

I think this is ridiculous , how is this show any difference from CSI ,law and order, Bones,it’s all about murders ,sex ,crimes .Svc is stupid to replace this show,I’m frankly pissed off nobody told us about the cancellation and I watch Dancing with the stars and then my shows gone….. Thank God Google lets you search anything or I wouldn’t figure out what happens to my show.and another show like this is Son’s of Anarchy !Also good …..

Please bring back this show or at least air all 8

So very disappointed for the cancellation ABC!!!! Yes this show was creepy but had me spell bound and could hardly wait until the next episode. Can you please air the remaining 5 episodes? Or at least release them to your website so viewers can watch them that way.

I LOVED THIS SHOW! It sorta reminded me of Dexter, which I loved as well.. so upset how ABC cancelled this show … now I have nothing to look forward to on Tuesday! Thanks abc -__-

I taped the shows and have watched all of them. Curiosity plus I like crime shows. It wasn’t as gory as some as saying, but the plot has been dull and vague and the detectives on the dumb side. Who is the MC? The villain or the detective? Hard to tell. If it has been the detective, he’s failed as a MC. If the villain, how is the public supposed to endear themselves to his character? Many reasons why this show didn’t make the grade and has been taking up space where a quality show could have been entertaining. Poor… Read more »

I really loved Wicked City and looked forward to it. On Tuesdays it was the only good thing on other than The Voice right now. So where do they get their numbers? I think it was a bad move. Why not run it to the end and see how it panned out rather than to run reruns of Shark Tank. Reruns are not going to get you numbers? Restart it!!!!!!!

The flash and iZombie come on on the cw Tuesday that’s where all the ratings went. But I love all of these shows. Sad they cancelled after 3 episodes.

Loved this show. So upset ABC pulled the plug. Let me love it, then yank it after three shows?!?! Wtf ABC???

I did not watch it as I felt the trailers were too graphic. I am delighted it has been cancelled

There are other people who enjoyed this show!

The Evening News is more graphic than this show. I’m sorry that you chose not to watch it. You missed an awesome show, well at least the first three episodes of it. You can always watch something else. Today’s reality is far worse than any t.v. show, but we can’t cancel it just because we don’t like it.

You need to renew this show! Its awesome!!! In fact I wish it lasted longer than an hour. Please consider what the viewer’s want. So many good shows get canceled and their are so few left that actually hold up…and Wicked City is one of the best shows! Actors are great, story line is fantastic and we need to know what happens.

I TIVO’d Wicked City, watched about 5 minutes. I couldn’t delete it fast enough.

LIKE!! Pls keep this show; there’s none like it. I’m sick of shows with the same ole cops and forensics, hospital, reality, political and fairy tale supernatural. I’m interested in the twisted love story with Kent and Betty, I like the Bonnie and Clyde kinda vibe.

It’s cancelled?? Why bother starting it if they’re gonna cancel it before they give the public a chance to like or dislike it? This is a great new series

I agree, I kept looking for new episodes and was disappointed when I googled it and found out it was cancelled.