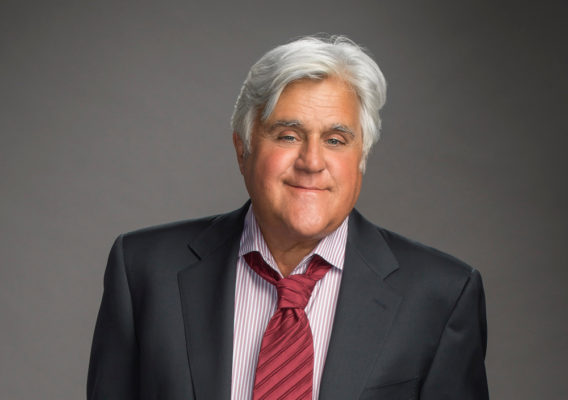 Comedian Jay Leno followed in the footsteps of Johnny Carson, Jack Paar, and Steve Allen as the host on The Tonight Show and now, he’s following three more comedic legends. Leno is hosting a new revival of the You Bet Your Life TV series starting in Fall 2021.

The newest incarnation of You Bet Your Life is expected to launch in syndication in Fall 2021 with 180 episodes. Here’s the press release:

NEW YORK, Sept. 9, 2020 — FOX Television Stations has announced the return of “You Bet Your Life,” set to debut in Fall 2021. The half-hour comedy game show will be hosted by Jay Leno and broadcast on the FOX owned-and-operated stations, as well as syndicated nationally. Tom Werner will serve as the executive producer, along with showrunner and executive producer, David Hurwitz.

“We need a familiar face to make us laugh and we are incredibly proud and excited to reinvent this renowned franchise with the enormously talented Jay,” stated Jack Abernethy, CEO, FOX Television Stations.

Jay Leno added, “I’m thrilled to be hosting the latest version of ‘You Bet Your Life.’ One of my favorite things to do is talk to regular people and draw humor out of them. This is a comedy show wrapped in a game show that allows me to do just that.”

Hosted by Jay Leno, this new incarnation of the legendary game show “You Bet Your Life,” will preserve the show’s trademark humorous interviews and unpredictable banter with each contestant, famously originated by Groucho Marx. For this reboot, the game will couple two strangers together for the opportunity to win prize money by correctly answering questions about pre-determined categories. Each episode will present two pairs of contestants.

180 episodes of “You Bet Your Life” will be distributed by FOX First Run.

Tom Werner stated, “David Hurwitz and I are thrilled to be working with Jay Leno and FOX on this classic Groucho Marx comedy. In these challenging times, we know America will be comforted to welcome Jay back every evening.”

“Jay Leno’s sense of humor is perfect for this legacy brand and I couldn’t be more excited to be partnered with him and Tom Werner to bring this iconic game that is full of laughs, back to television,” added David Hurwitz.

Jay Leno is an acclaimed TV late night show host, admired stand-up comedian, best-selling children’s book author, corporate speaker, TV and movie voice-over artist, pioneering car builder and mechanic, and philanthropist. In his twenty-plus year tenure as host of “The Tonight Show with Jay Leno,” the program dominated the ratings, perpetually holding first place. Prior to becoming the show’s host in May 1992, Leno had been the exclusive guest host on “The Tonight Show Starring Johnny Carson” since September 1987. He currently hosts CNBC’s “Jay Leno’s Garage,” an outgrowth of jaylenosgarage.com, a YouTube channel which Leno produces and which has an international following on the Web and which has garnered several Emmy Awards and nominations for Outstanding Special Class-Short-Format Nonfiction Programs. In addition, he is on various other television series, including “Last Man Standing.” Leno performs more than 100 stand-up shows annually across the country and internationally and participates in numerous charity and corporate events. He does voice-over work for animated movies, such as “Cars” and “Igor,” and television shows including Nickelodeon’s, “The Fairly Oddparents.” Leno has written multiple children’s books, including the NY Times Bestseller, “If Roast Beef Could Fly.” He also writes a monthly column in various automotive magazines. In his spare time, Leno enjoys working on his collection of classic cars and motorcycles and has built a number of cars, including an acclaimed eco-car in his eco-friendly green garage. Throughout his vast career, Leno has been honored by the Television Academy with an Emmy for “Outstanding Comedy, Variety or Music Series.” “The Tonight Show” has also taken home the trophy for “Favorite Late Night Show” at the annual TV Guide Awards determined by voting viewers. Leno is also the recipient of the People’s Choice Award and other honors, including the Harris Poll selection as most popular star on television. Other personal highlights include the Hasty Pudding Award at Harvard University, receiving a star on Hollywood’s Walk of Fame, and being the first person to drive the pace car of all major NASCAR events.

Tom Werner has executive produced over 1,500 half-hours of television, including landmark programs such as the original “Roseanne,” “The Cosby Show,” “3rd Rock from the Sun,” “That ’70s Show” and most recently, “The Conners”, currently in its third season. Werner has been inducted into the Academy of Television Arts & Sciences Hall of Fame, as well as the Broadcasting & Cable Magazine Hall of Fame. His company, Carsey-Werner, has produced shows which have won numerous Emmy(R) Awards (24), Golden Globes(R) (10), Humanitas Prizes (4), George Foster Peabody Awards (2) and NAACP Image Awards (24). Outside of entertainment, Werner serves as Chairman of the Boston Red Sox and the Liverpool Football Club. Under his tenure, the Red Sox have won 4 World Series, and Liverpool is the current champion in the Premier League.

David Hurwitz serves as President of Bill’s Market & Television Productions. He has established himself as one of Alternative Television’s most sought-after executive producers with a diverse slate and background that includes live variety, comedy, talk and game shows as well as revolutionary stunt competition series. Hurwitz has been part of such groundbreaking series as “The Arsenio Hall Show,” Comedy Central’s “The Man Show,” “Fear Factor,” Nickelodeon’s “Brain Surge” and “Ellen’s Game of Games.” The Emmy nominated creator has earned a reputation as a great story teller and format developer known for executing the spectacular and putting ordinary people in extraordinary situations on mega shows like “Fear Factor,” “American Gladiators” and “Stars Earn Stripes.” Hurwitz was entrusted with some of NBC’s biggest and most innovative launches such as “Best Time Ever with Neil Patrick Harris” and “Million Second Quiz with Ryan Seacrest,” the first ever show of its kind that allowed viewers to participate live in real time via a smart phone app. In 2020, he debuted the new hit YouTube series entitled “Instant Influencer with James Charles,” and the ABC family competition series, “Don’t.”

ABOUT FOX TELEVISION STATIONS
FOX Television Stations owns and operates 29 full power broadcast television stations in the U.S. These include stations located in nine of the top ten largest designated market areas (DMAs), and duopolies in 11 DMAs, including the three largest DMAs (New York, Los Angeles and Chicago). Of these stations, 17 are affiliated with the FOX Network. In addition to distributing sports, entertainment and syndicated content, our television stations collectively produce nearly 1,000 hours of local news every week. These stations leverage viewer, distributor and advertiser demand for the FOX Network’s national content.

What do you think? Have you seen any of the earlier incarnations of the You Bet Your Life TV show? Do you plan to check out the upcoming version?

You Bet Your Life I Will !