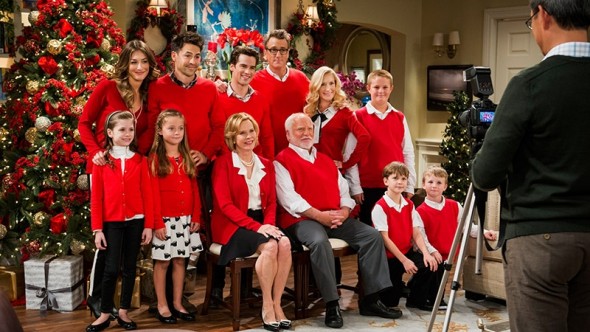 Last week, TBS cancelled their Clipped TV show after one season. It turns out that there won’t be a second season of their Your Family or Mine sitcom either. It’s also been cancelled.

Your Family or Mine revolves around a married couple in Seattle, Kelli (Kat Foster) and Oliver Weston (Kyle Howard). They and their two children alternate visits between their respective parents and in-laws, all of whom are quite unique. The rest of the extended family members are played by Richard Dreyfuss, JoBeth Williams, Danny Comden, Andrew Less, Angela Kinsey, Ed Begley Jr., Cynthia Stevenson, and Stephanie Hunt.

The series debuted in April to an unimpressive 0.44 rating int he 18-49 demographic with 1.15 million viewers. The ratings got a bit better at different points during the season but ultimately they were never very good.

The first season of 10 episodes ended up averaging a 0.46 rating in the demo with 1.27 million viewers. The last episode aired on June 9th and TBS decided that they didn’t want to order any more.

What do you think? Did you enjoy watching the Your Family or Mine TV show? Do you think that it should have been cancelled or renewed for a second season?

I think most viewers are married making it 2.5million viewers 😛 Sad to see it go. My wife and I loved it

I loved this show!! My husband and I related so well since our families are so different. Please reconsider a second season!

My husband and I enjoyed this show. Great concept! Bring it back.

I’m upset. I loved this show. Its the funniest show since Seinfeld. My friends and I laughed so hard. I wish the network would reconsider.

This was one of the few shows my wife and liked last year. The other comments on here sum up the reasons we liked it. TBS really blows.

There’s not much on cable that pulls me away from Netflix, but this show was great and one both my wife and I enjoyed…now tbs pulled it so they can cram more Big Bang repeats. What a disappointment. A show needs time to gain traction and have those 1 million + viewers to spread the word. Oh well…back to netflix

Stupid network has now cancelled the second of my favorite shows! This includes cougar town. Give it a chance for a second season!

No!! I can’t believe this! This show was HILARIOUS! This network is ridiculous for not at least TRYING a second season!

Couldn’t agree more. Very funny and original, what is wrong with TBS? Yes give it a chance!

I am so disappointed in this station. I have to say again what has already been said… tbs needs to give more of a chance, if over 1 million people watch, how is that a bad thing. You family or mine was funny and original. And you toss it. Bad form TBS

Loved this show, sad to see it canceled.

I agree with everyone else on this thread. I am very disappointed and won’t be watching any of TBS’s new shows. They keep cancelling all of the good shows.

TBS is looking for instant gratification. They don’t even give e shows a chance. I only record the “good shows.” Ground Floor, Clipped, Your Family or Mine, Cougar Town. DVR’d them all.

I completely agree with A’s comment. TBS should give shows a chance to gains an audience before canceling. After all one of the best comedies of all time (M*A*S*H) struggled in it’s early years. From now on I’ll wait to watch any new show TBS brings out till it’s been on a few years before i start watching it. Loved both Your Family or Mine and Ground floor and both got pulled early. So Sad.

What a bummer! Really enjoyed watching Your Family or Mine. Sorry to see it go. Not sure what TBS expects from their mid-season 10:00/10:30 pm original series.

Also had really hoped Men at Work would continue.

I liked BOTH if these shows. The language was a little over the top on Your Family or Mine (& I never get offended by language…just may have bothered some other viewers.
I’m going to stop watching TBS new shows. They have broken my heart too many times.
Sullivan & Son
Ground Floor
Clipped
Your Family or Mine
Men at Work
My Boys
….all taken from us too soon

Huge mistake cancelling. Hope they let another network pick it up. Whoever does will make a fortune. Very funny with a great cast. Found the series about half the season through. More a problem with the network than the show