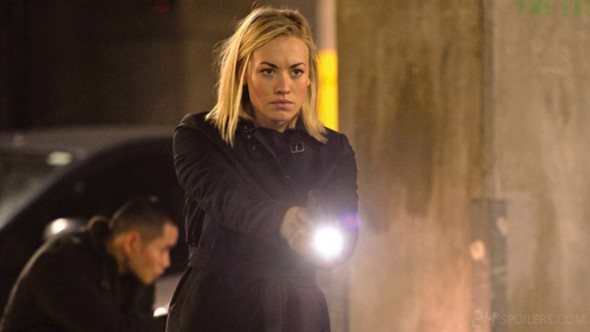 Last week, we reported that FOX had ordered a pilot for their 24 reboot series, 24: Legacy. Now, TVLine reports that the original cast will not be returning, including Yvonne Strahovski.

FOX explained that both Strahovski and the series’ original lead, Jack Bauer (Kiefer Sutherland), won’t be returning because 24: Legacy will feature an all-new cast and new story.

FOX CEO Dana Walden said the new series will “start from scratch,” focusing on “a military hero who encounters a troubled return to the U.S.”

What do you think? Are you a 24 fan? Will you watch 24: Legacy without Sutherland or Strahovski?

I was an avid follower of the Jack Bauer series. You severely underestimate the value and drawing power of Sutherland, Zoey, ET al.
Good luck. I will probably watch, but depends on when it is aired and what else is on at the time.
Not optimistic.

I’ll give it a chance, with tempered expectations. But if it sucks, I’ll probably watch all 12 episode anyways, but I’ll ***** about it on Twitter.

Kiefer isn’t coming back – that is his choice and not Fox’s. I do think they are smart to start over with a new cast – and I will miss Kate Morgan. If the star of the show won’t comeback, you move on….

Well, heck. With a whole new “start from scratch” story, and a whole new cast and NO Jack Bauer, why keep the “24” brand? Why not give it a whole new name? Oh, wait… marketing the cachet from ’24’. Like I said, well, heck. I think they need to change the name. Even “Pre-24” would do (not). Will I watch, probably. But I’ll be thinking that the network is insecure abt the show’s validity, and a little mistrustful of the fans. Too bad. It’s a dumb decision to keep the branding.

Everyone is simply against watching new spin-offs or a new show because a particular character isn’t in it?

When 24 first started there wasn’t a show like it and it grew on us to give a chance and we all fell in love with many characters.

I for one love the original series and will watch the new one.

My main two favorites were Jack and Chloe. 🙂

From scratch I will not watch, we need Jack Bauer

I for one was completely won over by Ynonne Strahovski as Kate Morgan. She was like Jack Bauer’s soul twin and would have been credible in the lead role, with occasional appearnces by Kiefer. But I am not interested in starting from scratch, so good luck! I hope you find an audience, because nobody who has commented here or on previous posts seems interested.

As much as I love 24, you’re ruining it without Jack Bauer or the original cast.

No I don’t think so absolutely not

Without Jack & Mary Lynn R., I won’t be watching.