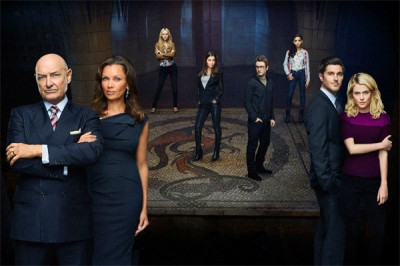 TV show description:
This TV series takes place at The Drake hotel which is located at 666 Park Avenue in Manhattan’s Upper East Side. It’s a place where all of one’s burning needs, desires and ambitions can be met — for a price, thanks to the building’s mysterious owner, Gavin Doran. But, be careful what you wish for.

After moving to New York City from the Midwest, young couple Jane Van Veen and Henry Martin are offered the opportunity to manage the historic hotel.

Jane (Rachael Taylor), a small town girl with big ambitions, has always had an interest in architecture and that convinced Gavin to give her and Henry the resident manager position — and the luxury apartment that comes with the job. When she’s not researching The Drake history for upcoming renovation plans or befriending her new neighbors, Jane finds herself whisked away to high-end boutiques and cocktail parties thanks to her new boss, Gavin’s wife Olivia.

Henry (Dave Annable) has proven himself a rising star in New York politics. Thanks to the Dorans, he goes from racquetball at the club to limousine escorts to parties at Gracie Mansion and Henry finds himself getting comfortable at the top — until he and Jane begin to suspect that something’s not quite right with their new home.

Gavin Doran (Terry O’Quinn) is the Gordon Gekko of New York real estate. For years, Gavin has owned The Drake and many of the souls that have passed within its walls. He promises his tenants’ deepest desires will come true. He can be your best friend, until you don’t pay on time.

His wife, Olivia (Vanessa Williams), is the queen of the Upper East Side and wears her elegance, wealth and position in society as armor. She’s the face of the power couple. But, while Olivia always maintains the appearance of sophistication, she can be just as ruthless as Gavin.

Jane and Henry unwittingly live in the dark embrace of the building’s supernatural forces which endanger the lives of its residents. These include:

Brian Leonard (Robert Buckley) is a young successful playwright who’s pining for his early success and promise. Plagued by writer’s block, Brian stumbles upon unexpected inspiration in the sexy and flirtatious woman living in the building across the way. With a front row seat, Brian struggles not to stare. But he soon finds staring isn’t necessary — his vixen of a neighbor shows up at his apartment, hired as his wife’s new assistant.

Brian’s wife is Louise (Mercedes Masöhn), a rising hot star in the world of fashion photography. Just as she’s catching a big break in her career, Louise has a mysterious accident in building’s elevator that puts her in the hospital. When she returns home to recuperate, Louise discovers that her history of addiction makes the road to recovery a rocky one.

Alexis Blume (Helena Mattsson) is the seductive siren living across the way from Brian and Louise. What begins as an innocent flirtation with Brian escalates when Louise hires Alexis as her assistant. Does she have some kind of connection to Gavin?

An independent 14-year-old who’s grown up at The Drake, Nona Clark (Samantha Logan) knows the ins and outs of the building and its residents. When Jane begins researching the building, the two forge an unexpected friendship. Nona possesses a mysterious psychic ability but the future she sees isn’t always bright.

Meanwhile, doorman Tony DeMeo (Erik Palladino) is the eyes and ears of the building.

Series Finale:
Episode #13 — Lazarus
Brian and Louise discuss what to do with Alexis’ body and decide to hide it in the basement. Gavin meets them on their way up from the basement and notes that Louise is missing an earring. Louise is worried that it might have been left behind with the body and they go back the basement.

Gavin confronts them there. He tells Brian and Louise that their lease agreement has been terminated because of Alexis’ death and he consigns them both to the basement wall.

Jane has a drowning experience in the bathtub when the chain of the stopper coils around her feet. She learns that her mother drowned in a similar way. Gavin and Olivia tell Jane that her father was the prime suspect in her mother’s death because he had discovered that she had been having an affair.

Gavin meets Henry at his campaign office and asks Henry to take a stand against Frank Sullivan, the NYC Councilman. Henry refuses to get into dirty politics.

Back at the building, Sullivan is found dead in his apartment. Gavin calls Henry to inform him that Henry’s stand of keeping quiet was a good call — particularly now that Frank was dead.

Jane’s father returns to the Drake and tries to take her away — at gunpoint. They enter the elevator and it malfunctions and opens into Gavin’s room.

Henry arrives looking for Jane and becomes worried after seeing that the bathtub faucet is open in their apartment. Gavin makes Jane’s father shoot Henry. She learns that Gavin is actually her father and he was the one who killed her mother.

Jane is desperate to save Henry’s life and Gavin tells her that there will be a price to pay if he allows Henry to live. Henry does live and he becomes the City Councilman.

Gavin tells Jane that they can take over the world with the help of Jane and Henry’s son. In the final scene, Jane tells Henry that she’s pregnant.
First aired: July 13, 2013.

What do you think? Do you like the 666 Park Avenue TV series? Do you think it should have been cancelled or renewed for a second season instead?

I love this show how they bring it back please please

I loved this show from the start, spooky and fun. TV Candy. Why do you people cancel the best shows before they can get established. At Least the show “LOST” was a show that had watchers cancelling everything else in their lives to watch it, it was given a chance to develop.
It boggles the mind that a show like “The Simpsons” which dumbs down the population could last so long.
Bring it back. You know if you don’t keep quality shows, people find other ways to get entertained. Netflix, Amazon Prime, Etc.
Smarten up, quickly.

Show was Awesome.. Very disapointed that it was canceled..

Please, there is so much room for creating a second season!! Bring it back!! thanks!

What’s wrong with you?! Commission another series! So much room for creative storylines.

Please bring it back ! The writing for this show was outstanding, great plot twists and just enough revealed each week to keep you guessing . Every time there is a good show on the networks, they cancel it .

Hi I loved the show I just saw the season on Netflix im mad it was only one season bring it back !!!

I loved this show , great acting , writing and I’m not a fan of the supernatural shows or movies but this one was excellent

Yes bring it back please

I really do miss the show. I kept waiting for it to come back on. Kept asking my daughter who also watched if I had missed it. It’s really to bad it was cancelled I was sure in to it. Please bring it back.

Loved this series hope to bring it back.