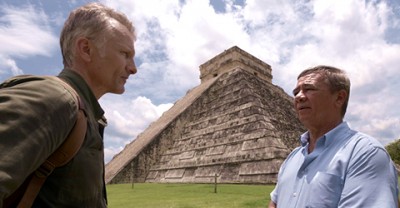 H2 has ordered a second season of America Unearthed. Production begins in the spring and Scott Wolter will return as the show’s host.

New York, January 29, 2013 – H2 has greenlit a second season of AMERICA UNEARTHED. Production on season 2 will begin in the Spring. Scott Wolter will return as host.

In AMERICA UNEARTHED, forensic geologist Scott Wolter, a real-life Indiana Jones, reveals that the history we all learned in school may not always be the whole story. Across the country, ancient symbols, religious relics and unexplained artifacts suggest that civilizations from around the world have left their mark for us to find today. Wolter not only digs through the surprising burial ground that is America for archaeological secrets, but he also uncovers compelling evidence that pre-dates the official “discovery” of the New World and turns a lot of what we think we know about American history on its head. AMERICA UNEARTHED proves there is a lot we don’t know about our past, and that people have gone to great lengths to cover up these mysteries. New episodes premiere on Friday’s at 10pm ET on H2.

AMERICA UNEARTHED is produced for H2 by Committee Films. Paul Cabana and Brian Meere are Executive Producers for H2.

H2 offers more to explore, more to reveal, more to know and more to understand. H2 provides a deeper perspective on global history, where information is entertainment, experienced in unexpected, clever and exciting ways. H2 is currently available in more than 68 million Nielsen households. It is available nationally through all major distributors.

What do you think? Will you be tuning in?

Mr. Wolter. I don’t know if you have heard of Indiana Mounds State Park, in Anderson, IN. This could be quite a historic site, part of which has been obliterated by Indiana University. A site that explains and shows some old photographs and drawings is moundbuilder.blogspot.com/2011/09/mound-builders-mounds. I never was able to go to see these sites, but I find them quite fascinating. There are also other places across Indiana, some have been saved and others are not appreciated and falling to ruin. Please check these out. Thanks.

Just want to share that I LOVE THE SHOW….first discovered over holiday break from teaching and I just could not turn the channel…even spent time with friends sharing what I learned.

I totally agree with the vast majority who have commented on the show and Scott Volter. It’s a fascinating series and when the evidence is there to back it up, more power to Scott Volter! It’s a lot more realistic and entertaining than Ancient Aliens, for sure. Hope it keeps going for many seasons to come.

Scott Wolter has ruined his reputation for all-time with this sorry excuse for a tv show. This is not history, I know the Vikings made it to North America but he honestly thinks just about every other ancient civilization did too. Also look up the facts on that copper mining episode, it clearly states that the Indians were the first to mine copper there. LOL

Can’t wait for the new season!!

Honestly had history been presented to me in this manner I would’ve paid a lot more attention in school. There needs to be more people like Scott Walters that are willing to go against the status quo. I myself have found that trying to do something that goes against academic or governmental and state agencies can end up getting you beat up. Quite honestly it’s unfair and it takes something like the history channel that willing to back people like Scott Walters and someone like myself to be able to go up against people that hide behind their shields” quantity.… Read more »

great show,nice to have a different point of view

I love this show! When will the season II episodes be shown?

great show. stay tuned for season 2. one of the episodes was filmed in the county over from us in Rockwall, Texas. Will be very interesting to watch. Heard the magnetic field of this wall is so great, that it is stronger than the one going around the Earth. but we’ll see if the rumors are true when it airs in the fall or next spring. 😀

For those of you who have written negative comments (Jim) among others how do you being to explain all the history, evidence Heisenberg uncovering thousand year old evidence much longer than Columbus who was kind enough to bring us small pox!!
‘

I watch this regularly and think Scott is phenominal. We have Knights Templar of Kansas, Lochinvar commandery #52 donating money to our hospital. This is on our list of donors in the hall. Thanks for many hours of interesting programs. Verna

i really hope that this show comes back, it seems like, when there is some one who trys to let others know the truth, the show stops,