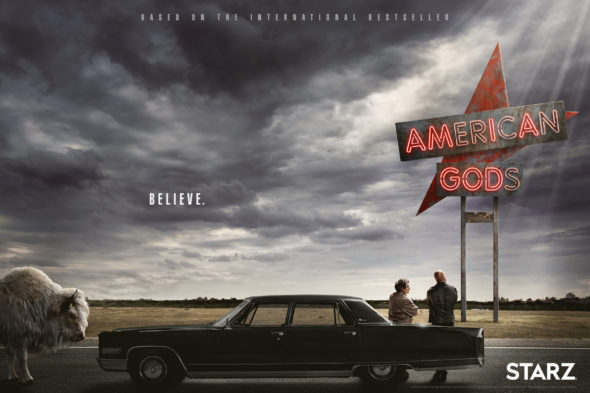 The supernatural drama  is based on the novel by Neil Gaiman and centers on Shadow Moon (Ricky Whittle), a former inmate who is drawn into a secret world where gods and magic are real. The cast also includes Ian McShane, Emily Browning, Pablo Schreiber, Yetide Badaki, Bruce Langley, Crispin Glover, and Orlando Jones.

On American Gods, Winters will be playing Mr. Town, Jacobs has been cast as Sam Black Crow, and Kim will portray New Media. Season two is expected to debut on Starz in 2019.

Season two of the eight-episode one-hour scripted drama series returns to Starz in 2019 with Dean Winters cast in guest role as Mr. Town. A strong believer in progress, Mr. Town is tasked by Mr. World (Crispin Glover) to find out what Shadow (Ricky Whittle) knows about Mr. Wednesday’s (Ian McShane) plan. His brutal efficiency and technique just may get him the answers to his curious questions.

Devery Jacobs, a First Nations actor, has been cast in a recurring guest star role as Sam Black Crow. Sam, a college student, is spiritually cynical for someone who claims to believe in so much. She lives life with fierce confidence and openness, selling the chainsaw art she carves by the roadside for extra money.

Kayhun Kim, a Julliard alum, will take on the recurring role of New Media. New Media is the goddess of global content – and in this age, a cyberspace chameleon, who is also a master of manipulation.

Dean Winters is best known for his role as Ryan O’Reily on HBO’s award-winning series “Oz.” Winters recently reprised his recurring role on Season 2 of “Divorce” with Sarah Jessica Parker in addition to recurring as Tina Fey’s “Beeper King” boyfriend on the Emmy(R) and Golden Globe(R)-winning comedy, “30 Rock.” He was a series regular on FX’s critically-acclaimed “Rescue Me” in which he played Denis Leary’s cop brother. Winters has appeared in some of the most highly acclaimed television shows, including “Sex and the City,” “Law & Order SVU,” “CSI: Miami” and “NYPD Blue” and was also seen on “Sarah Connor Chronicles,” “Life On Mars,” “Brooklyn 9-9” and “Battle Creek.” His feature credits include P.S. I Love You with Hilary Swank, Winter of Frozen Dreams opposite Thora Birch as well as co-starring alongside Keanu Reeves in John Wick. Upcoming, Winters will be seen in the Netflix film, Graduate, with David Spade as well as the Independent film, Shotgun, with Sasha Lane and Marisa Tomei.

Kawennáhere Devery Jacobs is a film and television actress, and filmmaker. She was born and raised in Kahnaw�:ke Mohawk Territory, which has shaped her passion for Indigenous rights activism and interest in politically charged roles in film. Her debut leading role as ‘Aila’ in the award-winning feature film, Rhymes for Young Ghouls (2013), resulted in Jacobs being nominated for Best Performance by an Actress in a Leading Role at the 2014 Canadian Screen Awards. She also won Best Performance in a Canadian Film at the 2016 Whistler Film Fest and Best Actress at the 2017 American Indian Film Fest for her work in the feature film, The Sun at Midnight (2016) and has completed production on her third leading role in the feature film, The Road Behind (2018). Jacobs was named as a one of Canada’s Rising Breakout Stars by The Hollywood Reporter and was honored by Telefilm Canada at the 2017 Birks Diamond Tribute, celebrating women in film. She was also newly announced as the leading character of Sam Duchene in season three of the hit series “Cardinal” (2017), and was selected as one of the participants of the prestigious Actors Conservatory offered by the Canadian Film Centre. Furthermore, Jacobs has recently explored the other side of the camera, with her directorial debut of the short film Stolen (2016). The film discusses the national issue of missing and murdered Indigenous women in Canada, and won Best Aboriginal Film at the 2017 Yorkton Film Festival. Jacobs was also awarded the BravoFact grant for her short film, Rae (2017), which garnered Best Youth Work prize at ImagineNATIVE Film Festival.

Kahyun Kim moved to the United States from South Korea and was immediately accepted into the prestigious Drama School at Juilliard. She graduated in 2012 with her BFA in Theater. Kim promptly started making her mark in the entertainment industry with recurring roles in “The Mysteries of Laura” and “Austin & Ally.” She’s since worked on multiple projects in both TV and film for the better part of the past five years. Recent projects include a guest starring role on the hit Showtime show, “Shameless” as well as a recurring role in “Cassandra French’s Finishing School.” She will next be seen in a great supporting lead role in the Disney reboot of Freaky Friday, set to release during the summer of 2018.

I loved the 1st season of American Gods and can’t wait for season 2.

I will absolutely be watching Season 2 and more if they continue after that!! I love this show!!! I can’t wait!!!

A very stylistic show that in the beginning was in danger of forgetting the story but the more you watched, the better it got.

Looking forward to the next season.

The show is mediocre, not worth all the money they spent on it.