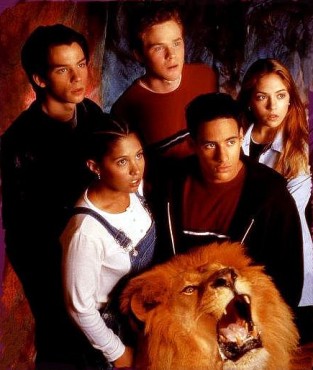 TV show description:
Five children are given the power to morph into any living creature in order to battle a parasitic race of aliens called the Yeerks.

An Andalite named Elfangor-Sirinial-Shamtul (Diego Matamoros) bestows the powers on brave Jake Berenson (Shawn Ashmore), reckless Rachel (Brooke Nevin), farmgirl Cassie (Nadia-Leigh Nascimento), self-assured Marco (Boris Cabrera), and socially-awkward Tobias (Christopher Ralph). The children can stay in a morphed shape for no more than two hours or they will be trapped in that shape, as Tobias learns.

The kids are joined in the fight by a young Andalite named Aximili-Esgarrouth-Isthill (Paulo Costanzo), the brother of Elfangor.

Series Finale:
Episode #26 — “Changes, Part 3”
Tobias follows the trail of hawk images being left around town and is shocked by what he finds. Meanwhile, Marco notices a suspicious looking construction worker hanging around school. He investigates and discovers that his friends and the rest of their classmates will be in grave danger at the dance. Before he can tell anyone, Marco finds himself trapped.
First aired: April 23, 2000.

What do you think? Do you like the Animorphs TV series? Would you have liked to have seen a third season?

Just finished watching this series on netflix…..iv been watching it non stop t about a week, on and off, so to find out it has no proper endind cos the show was cancelled…really does Annoy me. Netflix should just remove it from its site to stop others feeling the disappointment that many others like myself have to put up with…A great show but a poor endind to it, wat a shame.

Animorphs
I grew up with this show and am now re-watching it on Netflix. Il very disappointed, as are my kids, that the show ended before the story did. I love how the show was dark abs very 90s, but maybe we could restart the series so that we may finish it?

I just finished watching the episodes online and I too am really disappointed at how it just ended like that. I really liked this series and how it captured what kids did in the 90’s so well. The effects were sometimes cheesy but that’s what made it cool, more for the imagination. The story telling was good and it felt like it was building up to something.

If anyone is still interested in watching, all episodes are on Netflix. A bit disappointed, as I see it must have been run on a low budget 15-17 years ago. I think if it gained enough interest, they could reboot the series but sadly, I don’t see it happening 🙁

I am so in love with this series. It comes on during the week at 3:00 a.m. on Qubo. The only reason I watch that horrible tv channel. I am so mad that they just left us hanging like that & didn’t make an ending. Seems unprofessional to me, but my opinion doesn’t matter. I wish this series would have gone on for life. Though it would have been cool with a few fight scenes. If I was in the cast I would have loved kicking some controller ass. (Excuse my French). The cast of Animorphs will forever be my… Read more »

They should have continued

I think the series should be finished, the show staryed off pretty slow but as season
two started it got more interesting and I would like to see how tobias goes on now that her learned about his father.

The cast hasnt aged one bit! However they should either pick up where they left off or starg it over but loved the cast .. still watch the reruns. ..everything else comes back and does awesome look at teen aged mutan nt!

I loved the books and the show i truly wished they never cancelled it would’ve been awesome if they had a 3rd season just to let us know if the Animorphs defeated the yeerks or Died Trying at least.

Yeah I Agree Im still wondering why they cancelled

they cancelled because kids found it too creepy and lost ratings from their young viewers.

This series had tremendous potential and despite fan reviews on the web bashing the acting and the graphics I’d like to take a different approach, and commend the series for being dark and so 90’s esque, and after blowing through the series on Netflix I am extremely disappointed that I will not see the end of the Yerks vs. The Andelites.

This show is terrible. I read the books and the show hardly compares. And not even because of lack of technology and cool effects. Mostly because of the terrible script and sequence of events. Things progressed too quickly from how they did in the books. I could go on but it was just disappointing

I think they should just start the whole thing over because there’s way more technology to show more graphics to make it look more believable and because if they use the same cast from before there’s going to be a age difference from the last episode and plus they’re supposed to be teens anyway.