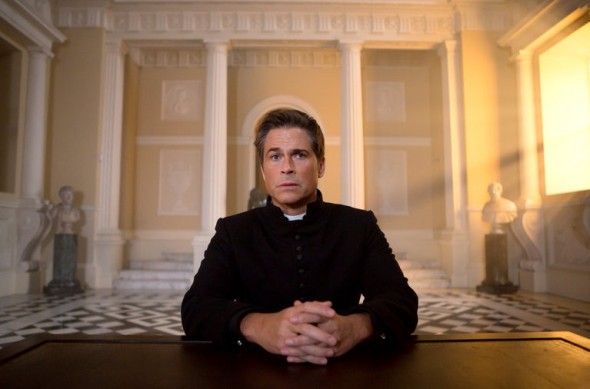 NOOOOOOOO!!!!! There has to be something we can do. There is finally a good show on a regular TV. This bothers me so much. I just found this show and I have been binge watching! There has got to be a SEASON 2

Totally disappointed. I expected at least another season. At the end of the last episode, Ariel was crawling over a sewer grate which leads into the bunker.

damn you SKY for not renewing this show for a second season!!!

i feel like there is so much left to be done with this show.. it is very well played too.. you can tell the actors cared about their roles.. im sad to see this go. they could at least give us a winddown episode or a short movie on it, so we all know what happens.. is that really ariel???? god i hope not!!!

Booo, hiss. This was such a funny, different, really creative show. We LOVE it and have told so many others about it. Hate that it won’t be back.

Please post the exact address to the Facebook link. Im not sure how this site works, but would love to take it to the next step yo get this show renewed on any channel!

We have to be positive it will be back hehehe

I feel like there was a lot left up in the air…and that’s disappointing. If they chose to do a second season, it could be as the first season was, and go back in time to show what’s up with the weird grandma, and the monkey, who’s in the crate? Is Jamie the son of God? How does that all pan out? Then maybe end the season with Jamie getting inside the bunker somehow because that really disappointed me. I think at least ONE more season to wrap things up would be worth it.

Sad to hear it won’t be back on. I just watched 4 episodes tonight. Love the show and the cast.

There was so many cliffhangers and to be honest they could of come up with a new story like what if there was two meteorites heading to Earth but they only knew of the first one because the second (which is slightly smaller) was hidden by the first. Not happy with Sky now. Bring Back You, me and the Apocalypse.

OMG. Loved the whole premise of the show! The cast of characters was tremendous and the suspense was non-stop!!! Please say it isn’t so!!!

I find this show to be quite ‘quirky’ and have been having fun watching it. The problem ,as I see it ,though is that it doesn’t seem to make up it’s mind that it is a comedy or drama. So, therefore, even with such a strong cast, I am not surprised to hear of the cancellation. It does have potential though…..but, the concept now just doesn’t seem to work.

I do not think this show ever was supposed to be a drama…….. comedy all the way!

I honestly didn’t think I was going to like this show because the premise sounded ridiculous, but I saw the first episode and got hooked from the get-go. Sucks that’s it’s a one-and-done series, but apparently there was never a second series planned to begin with. Funny,cool show with a lot of interesting characters, dark humor, and a marvelous diverse cast.

Is bc people need more sense of humor, and see life from another perspective, enjoy life, love and be happy, even if u know that your world will end one day, but is up to you if you have a second season I hope so hehehe

Bummed it was cancelled, I just found this show and could not stop watching out.

I was looking forward to seeing whatvhapoened next, so disappointed the show ended.

No, no, no! Theyre are so many cliffhangers that need resolved! I was always looking forward to a second season…

I enjoyed the show. Megan Mullaly is great. But, if an asteroid hits the earth, that should be the end.

I only watched 2 episodes and then quit watching… didn’t care what happened to any of them… least of all Megan Mullaly. And I was soooo disappointed in the priest/nun part of this. I won’t miss it.