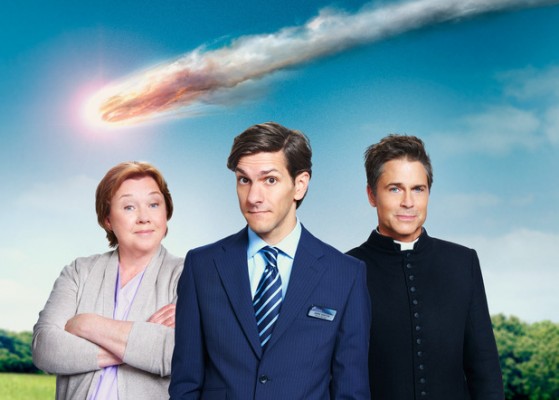 What comes after the end of the world? Recently, Mat Baynton spoke to Radio Times about the possibility of a season two for his British-American sci-fi dramedy, You, Me and the Apocalypse.

The first season of the show concluded earlier this week in the UK and will air on NBC some time in 2016. SPOILERS AHEAD

Created by Iain Hollands, the series chronicles a group of characters as they deal with the news that a comet is going to hit Earth and destroy the world. The show stars Baynton as an English bank manager, Jenna Fischer and Megan Mullally as two prisoners in New Mexico, and Rob Lowe as a Vatican priest.

Speaking to Radio Times, Baynton said he’d gladly do another season, but it would “be very different to the first.”

As of yet, there is no news of the show’s renewal.

Baynton, about a possible season two:

If there’s a second series it will be very different to the first. It will be about the bunker and how people get on in there or probably about the future when they emerge from that bunker. I am not saying it will be set in a bunker but let’s say it could be.

I really liked that about this series. [Writer] Iain Hollands said ‘no, we are promising the end of the world and we are going to give the audience the end of the world’. The fact that we get there is a great thing. It’s giving the audience some sense of completion. It’s so unsatisfying having an unfinished story and you have to wait 18 months to find out what happened.”

What do you think? Did you watch the first season of You, Me and the Apocalypse? Would you like to see another season?

Love this bring it back, please.