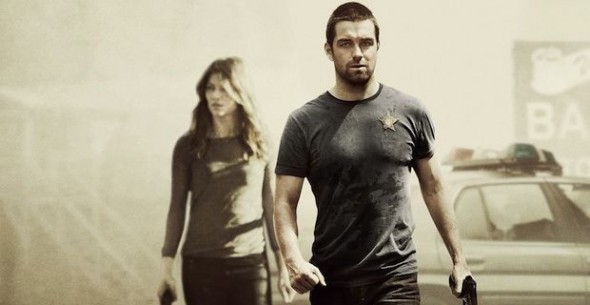 Cinemax has announced that production has begun on the fourth season of their Banshee TV show. The eight episodes will start airing some time in 2016.

BANSHEE concluded its third season last month, achieving record ratings for CINEMAX as well as critical acclaim. Yahoo! named it “TV’s best action show,” while the A.V. Club described the series as “one of the best things on television, period.” The Huffington Post called the show “wildly witty,” and Grantland said BANSHEE is “a whole hell of a lot of fun.”

Other cast includes Ivana Milicevic (the upcoming “Aloha,” HBO’s “Mind of the Married Man”) as Carrie Hopewell, a notorious jewel thief who lives in Banshee under an assumed identity with her new family, which has recently learned of her criminal past; Ulrich Thomsen (“The Celebration”) as Lucas’ arch-enemy, Kai Proctor, an intimidating, wealthy businessman who believes he is above the law; Hoon Lee (“The Blacklist”) as Job, a dangerous transvestite computer hacker who assists Lucas and Carrie in their criminal enterprises; Frankie Faison (“The Good Wife,” HBO’s “The Wire”) as Sugar Bates, a wise and powerful former boxer who owns the local watering hole and serves as confidante to Lucas and Job; Matt Servitto (HBO’s “The Sopranos”) as Brock Lotus, Lucas’ long-suffering veteran deputy; Ryann Shane (“Lights Out”) as Deva Hopewell, Carrie’s teenage daughter, who is rattled after learning Lucas fathered her; Lili Simmons (HBO’s “True Detective”) as Rebecca Bowman, Proctor’s sexy niece, who has taken on a larger role in his criminal activities; Matt Rauch (“The Blacklist,” “The Wolf of Wall Street”) as Clay Burton, Proctor’s multifaceted, complicated bodyguard and right-hand man; Tom Pelphrey (“The Following”) as Kurt Bunker, a former skinhead who joins the Banshee sheriff’s department as a deputy; and Chris Coy (“The Walking Dead,” HBO’s “Treme”) as Calvin Bunker, Kurt’s unsavory brother, who has kept his Nazi ties.

New to the cast are Eliza Dushku (“Dollhouse,” “Buffy the Vampire Slayer”) as Veronica Dawson, a tough, sexy and shockingly reckless FBI profiler with no shortage of personal demons, who joins forces with Lucas, and Ana Ayora (“The Big Wedding”) as Nina Cruz, a Banshee deputy working as an inside plant for Proctor.

What do you think? Are you a fan of the Banshee TV series? Will you be watching the fourth season?

This is action/drama at its finest. Love all the characters in this series especially the ex-Nazi Bunker. Kudos to the writers, producers, and actors. Can’t wait for the debut of season 4.

My favorite tv show and can’t until it comes back on. Also, love all the actors and story lines. Plus I have been watching from the first season.

My favorite tv show and can’t until it comes back on. Also, love all the actors and story lines.

Great t.v. show didn’t know about Banshee until about the start of season 3 watched 1 & 2 over a couple of days just in time for season 3 starting. Can’t wait till season 4 starts good acting good stories great show.