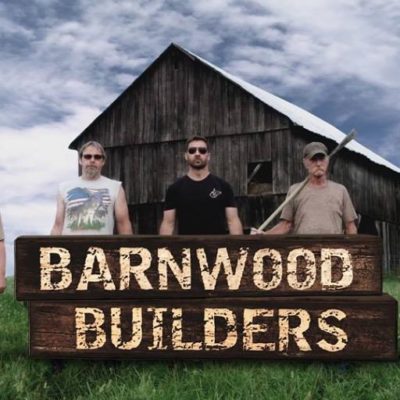 DIY is headed back to the barn. Recently, the network announced season seven of Barnwood Builders debuts later this month.

The renovation series follows “Mark Bowe and his team as they reclaim centuries-old cabins and barns and transform them into stunning modern structures.”

New York [June 28, 2018] Master craftsman Mark Bowe and his West Virginia crew are back for a new season of DIY Network’s popular series Barnwood Builders. Premiering Sunday, July 15, at 9 p.m. ET/PT, the fresh 13 episodes will follow Mark and his team as they reclaim centuries-old cabins and barns and transform them into stunning modern structures. They will tackle several unique projects, including a rustic wedding venue makeover and the renovation of a 3,500-square-foot colonial into a 19th century log home. More than 4.8 million viewers watched the last season of Barnwood Builders, its highest rated season to date.

“We build more than cabins,” said Mark. “We create homes built for memories. The stories of the past live on in the beams, and we put them together to help people realize their log home dreams.”

In the premiere episode, Mark and the guys will help a special client make his late wife’s dream come true when they build a cabin on the lake that she designed. The 1880s replica cabin will be crafted with more than 100 antique logs for an authentic pioneer look.

“Twenty years later, we’re still taking down barns, and I think that’s what this business is all about – doing what you love and surrounding yourself with the right people,” said Mark.”

What do you think? Have you seen Barnwood Builders? Will you watch the new season?

Barnwood Builders is my favourite show of all shows. I’m Canadian but love the history, the fun the men have and learning many things about old barns. My grandfather had such a big barn where us kids played in the haymow and with the machine that grabbed a bunch of hay and delivered it up to the top of the barn and deposited it where it was supposed to land.
Thank you for making such a wonderful show.

When are they on and what channel?

This is the best show to learn History of the Land I have learned so much and i am not American BUT Canadian . It also the only TV Show with fun and enjoyment NO swearing or use of any damaging language or suggestions .

This is the best show to experience our history first hand. That I have been able to find !

We love bar wood builders, it is the best tv show and hope it continues.

Love the show barnwood builders. I think it’s awesome to see the history of log cabins being preserved.

Love every episode. Hope they keep finding old barn to repurpose. The crew are so good together and show true friendship amongst themselves and to the clients they work with. This show is informative and entertaining. Not much onTV these days fits that catagkry.

Our favorite show! Have gone through numerous personal losses, turning on this show always helps. The kindness of all the men along with the information regarding the barns of our country touches us in a way we cannot explain. Please do not take this show off the air.

Hi guys…love , love, love your show. I see someone in Appomattox, Va is selling an old log cabin for $25.00 obo but it has to be moved off their land. How much would it possibly cost to move it or would it have to be taken apart and rebuilt? It looks to be like 24×20 1 room
building. DONNA

Absolutely the best show. Love all of the guys on the team!!!!

Mark had claimed a PA bank barn he was disassembling for his Barnwood Home. Will we ever see the progress an completion of it?

I would like to know the same thing, Mr. Steptoe.