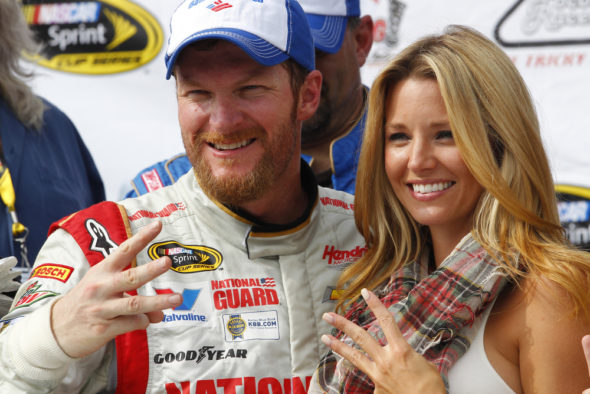 Dale Earnhardt Jr. is preparing for another kind of race. Recently, DIY announced the NASCAR racer and his wife will host a new TV show, Renovations Realities: Dale Jr. & Amy.

The home renovation series will see Earnhardt and his wife, Amy, “transform a dilapidated 150-year-old historic home in Key West, Florida into a gorgeous coastal retreat.”

“We saw this rundown old house in the Key West historic district – it was a cat sanctuary,” said Dale Jr. “It was the only house within blocks that was in this shape.”

Added Amy, “It’s a huge eyesore, but I have a vision for how we can bring it back to life.”

During the season, Dale Jr. and Amy will restore the neglected property to its original charm, from excavating faulty plumbing to whitewashing century-old bricks that will be used to build a bathroom accent wall. To create the perfect vacation home, the couple and their construction team will open the main level to provide a large entertaining space and will reconfigure the two-story floorplan to add a guest bedroom and two bathrooms. In addition, the backyard will be converted into an idyllic tropical getaway complete with an outdoor kitchen, dining area, pool and hot tub.

Fans can visit diynetwork.com/DaleandAmy for before and after photo galleries of the home and exclusive videos highlighting the renovated spaces. They also will find behind-the-scenes moments with Dale Jr. and Amy. Viewers can interact via social using #DaleAndAmysReno.”

What do you think? Are you a fan of Dale Earnhardt Jr.? Will you watch his new DIY series?

How could Dale jr lower himself to be on this channel ? NBC forget it ! Do you think he is that uninformed…

My wife and I were Dale Jr biggest fans until Dale desided to betray his Americian fans with 1 stupid tweet about imagration. We are a country of LEGAL imagrants. It totally broke our hearts and now NBC fake news jaw dropper. Your dad is not happy…please think about what you are doing our country is slipping away fast. Soon you will be brain washed by all the liberals until they don’t need you anymore so sad Dale.

How many renovation shows can they have? Suddenly everyone is a contractor