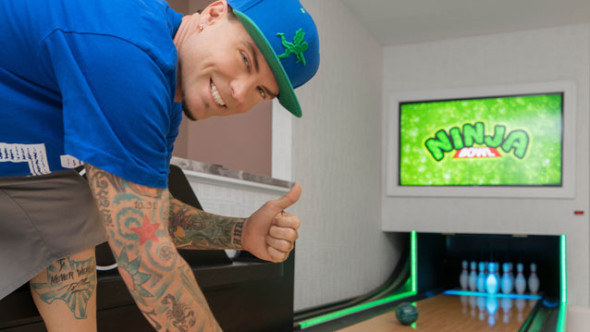 The Vanilla Ice Project is back! Recently, DIY announced the TV show’s eighth season will premiere in August.

The renovation series follows Vanilla Ice (aka Rob VanWinkle) “and his team of “construction ninjas” as they transform a derelict 1970s house into an ultra-modern, state-of-the-art home with over-the-top amenities.”

Season eight of The Vanilla Ice Project premieres on DIY on August 11th at 10 p.m. ET/PT.

New York [July 17, 2018] Pop icon Vanilla Ice, a.k.a. Rob VanWinkle, takes on another sensational house flip in a new season of his popular DIY Network series, The Vanilla Ice Project. Premiering on Saturday, Aug. 11, at 10 p.m. ET/PT, the fresh 10 episodes star Vanilla Ice and his team of “construction ninjas” as they transform a derelict 1970s house into an ultra-modern, state-of-the-art home with over-the-top amenities. This season of The Vanilla Ice Project is all about big risks and big rewards since the property boasts a 30-person hot tub, infinity edge pool with an epic waterfall, airport hangar, five-car garage and fully equipped gym.

“Wait until you see what we’ve got in store this season,” Vanilla Ice said. “It’s going to be rockstar-style to the fullest, with our biggest, baddest and most blinged-out season of VIP yet.”

The season features Vanilla Ice as he buys the Palm Beach pad for its spectacular location and converts it into a blinged-out home full of style. The renovation also hits a few snags along the way, including extreme weather conditions, countless inspections and a massive budget management challenge. However, Vanilla Ice and his team will build the property into a modern castle fit for royalty.

What do you think? Have you seen The Vanilla Ice Project? Will you watch the new season?