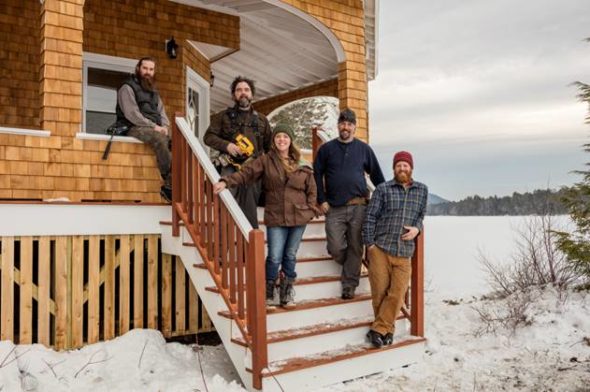 DIY is headed back to Maine. Today, the network announced they’ve renewed Maine Cabin Masters for a fourth season.

DIY has ordered 16 new episodes of Maine Cabin Masters. You can read more info below:

New York [April 18, 2019] DIY Network has ordered 16 additional episodes of its hit renovation series Maine Cabin Masters. The series was the #1 program on DIY Network during its run – up 30% among viewers P25-54 over its previous season. Season three attracted more than 3.5 million total viewers since its Dec. 3 premiere. During the series, master builder Chase Morrill and his fearless construction team renovate dilapidated cabins along Maine’s stunning waterways.”

What do you think? Have you seen Maine Cabin Masters? Will you watch the upcoming season?

I watch your show all the time, I love seeing all of you work together, can you tell me where My husband and I could look for a cabin on the water? I would love to meet all of you. We live in Orlando, Florida, it gets to hot here in the summer and would love to check out a cabin. Go with God!

My love and I truly enjoy Maine Cabin Masters. It’s actually our very favorite show on television. Please don’t ever cancel it.

Love love the show
If you hadn’t continued I was ready to stop watching DIY
This is truly the best!!!!

Maine Cabin masters is the most enjoyable show on the tv. My family can’t wait for the new season.

Best show ever! Please do not cancel. So family orientated and honest living in everything they do.

This is one of best shows on tv. We need more family shows like this. The scenery is beautiful and the team work so good together.
LOVE THIS SHOW

I love watching the Maine Cabin Masters.
My Daddy was a carpenter and saved and did really cool originally things like Chase.
I think they are all extremely talented.

So enjoy this family show which I originally watched because I miss the Maine accents so much. Now I have several of my Floridian friends hooked on this show too as we all love to learn easier quicker ways of doing things. Keep up the excellent work!

“Great series” I record the every show for my family of fiends who always forget to watch it. Hope their is a season 5.