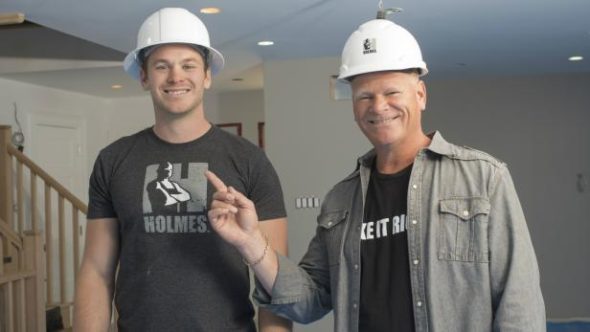 Father and son have returned. Today, DIY announced a new season of Holmes & Holmes will debut in July.

The new season of Holmes & Holmes premieres on DIY on July 10th at 9 p.m. ET/PT.

New York [June 19, 2018] Professional contractor Mike Holmes and his son, home renovation expert Mike Jr., will tackle more father/son projects when the new season of DIY Network’s Holmes & Holmes premieres on Tuesday, July 10, at 9 p.m. ET/PT. Armed with Mike Sr.’s personal mission to “make it right,” the 12-episode season will star the pair as they buy and transform three tired properties into dream homes. But it won’t be all business during this family affair as Mike Jr. plans his wedding to fiancée Lisa throughout the season.

“I’ve worked for my dad for well over a decade and now we’re teaming up and going into business together,” said Mike Jr. “This paired with planning my wedding is a new—and challenging—experience for me.”

The series also features the struggles of working with family. In the premiere episode, Mike Jr. was surprised to learn his dad had already purchased the house that will be their first project as official business partners. After the shaky start, the duo agrees to work on the ground rules of their new partnership so they can get along and turn a profit.

“I’ve been in construction more than 35 years, and I’ve seen it all and fixed it all,” said Mike. “The best part is I’ve been able to teach my son everything I know along the way. And now getting to be business partners with him is something I always hoped would be in the cards for us.”

What do you think? Have you seen Holmes & Holmes? Will you watch the new season?

My father is a retired vet in Cartersville Ga. He was recently diagnosed with stomach cancer. He has his heart set on a property that is in desperate need of renovations. I have watched Mike Holmes and his son take a home so damaged and make it beautiful. My brother says he can make repairs but, he has zero experience. My question is how does someone get a chance to have a home renovated? I know that there are several programs that help with this. I have watched just about all of them. Mike Holmes is so compassionate about the… Read more »

I’ve watched your show for many . My husband passed away eleven years ago so I’ve hired people for repairs and found myself hiring more to redo the work that I trusted to be done right. My home was my husband’s and my dream home. My daughter and her three children now live with me and we still are having many repair problems. We recently had our floor done by Lowe’s and it was a NIGHTMARE. The. Contractor they sent did it wrong now we need to have it redone. Being on a budget makes things hard to do. CAN… Read more »

I Love the show & would definitely watch another season❤️

Why was sherry cut out of show? still will watch.