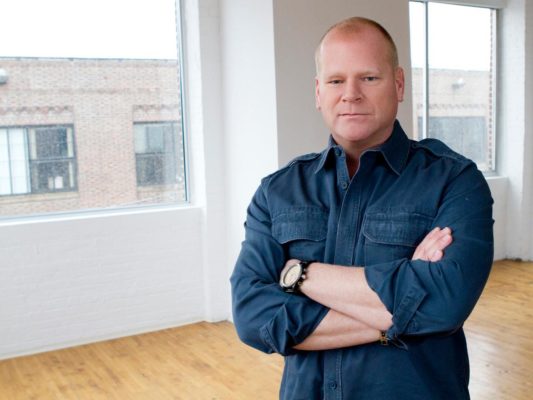 The home renovation series will follow Holmes “as he teams up with his daughter Sherry and son Mike Jr., who also are home renovation experts, to rescue homeowners from do-it-yourself projects gone wrong.”

Holmes: Next Generation premieres on DIY on April 17th at 9 p.m. ET/PT.

“I’ve been making it right for homeowners for over 35 years,” said Mike. “Now it’s time for the next generation of Holmes to step up. But it’s not easy living up to my standards.”

“Dad likes things his way,” added Sherry. “But we’re getting him to consider our point of view and new ideas that he would never normally choose.”

In the premiere episode, Mike, Sherry and Mike Jr. will help a homeowner finish the incomplete improvement projects started by her late husband. After repairing the damaged roof and cracked foundation, the trio will give the property a major refresh with a modern kitchen, new hardwood flooring and a bright, open staircase.

“We’re going to help this deserving homeowner get some peace of mind,” said Mike Jr. “This will be a great fresh start for her.”

Throughout the season, fans can visit diynetwork.com/HolmesNextGen for exclusive online content, including sneak peeks of Mike Jr. and Sherry’s DIY projects for the homeowners, behind-the-scenes bloopers and photos of the renovated spaces. Viewers also can interact on social media using #HolmesNextGen.”

What do you think? Are you a fan of DIY? Will you watch Holmes: Next Generation?

My husband & I absolutely love this show.
They are awesome in their work. They genuinely CARE and we learn something helpful EVERY episode.
Thank you Holmes family for your show & ALL U DO.

Can you help us in Billings Mt ?

I love Holmes Next Generation. I only wish we had a similar thing in Tennessee. Due to an electrical contractor error when working on my home they caused my house to flood when they failed to reconnect the sump pump after installing a new breaker box and some wiring. Then refused to make it right. My homeowners insurance only allowed for $5000 initial clean up and hauling off everything that was beyond salvaging. 1415 square feet of furniture and personal positions. Plus the scrubbers they used to get the mud up took all the waterproofing up off the concrete floors… Read more »

I love the show but it really bothers me that they trash things that could easily be donated for re-use!