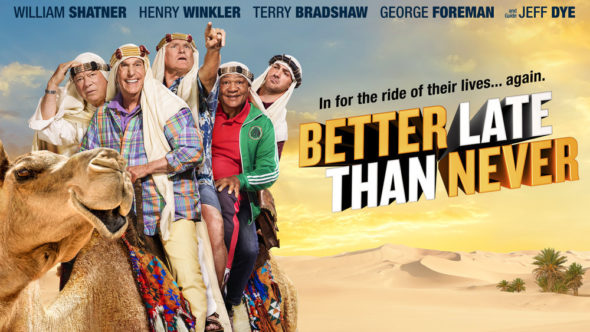 Although the first season of the Better Late Than Never, TV show performed pretty well for an unscripted, summertime series, it has been off the air since September of 2016, so some fans thought it had been cancelled. Instead, NBC is bringing back the celebrity travel program for your winter viewing pleasure. Now it’s time to see whether that will boost viewership, or cost the Peacock Network viewers. Will Better Late Than Never be cancelled or renewed for season three? Stay tuned. *Status update below.

An NBC reality TV series, Better Late Than Never follows Henry Winkler, William Shatner, Terry Bradshaw, and George Foreman as they travel the world, with both help and misdirection from tech-savvy comedian, Jeff Dye. In the second season, the celebrities will journey to Munich, Berlin, Lithuania, Sweden, Barcelona, Madrid, and Morocco. There, they’ll meet up with guest stars including David Hasselhoff and Al Roker, as well as Björn Ulvaeus, of ABBA.

2/6 update: You can see the rest of the latest night’s ratings.

For comparisons: The first season of Better Late Than Never on NBC averaged a 1.58 rating in the 18-49 year old viewer demographic and 7.308 million viewers.

What do you think? Do you like the Better Late Than Never TV series? Should it be cancelled or renewed for a third season on NBC?

*7/16/18 update: NBC has cancelled Better Late Than Never so there won’t be a third season. Details here.

My husband and I are hoping there is a third season as well as our grown children and their children.

My husband and I love this show. The “cast” is fantastic. Please, please, please renew it for another season!

Best show ever!!!!! i look to this show every week after a long and most times hard day to make me laugh and go to off to bed a happy relaxed women.

My whole family loves this show! It is one of the few shows on TV with good wholesome entertainment. You need to renew it for season 3!

Love the show! Even our 24yo makes time to watch with us. Season 3 please.

Love it! We laugh so much!

Best show ever!!! Keep it going!

Hope it comes back for season 3. Love the show

Love the show! Super fun! Hoping for a season 3!

Late to the party. Please don’t take it away! It’s hilarious and sweet. We love it!

I just watched this show last night for the first time. Never heard of it. I hope they don’t cancel it. I loved it.

I LOVE this show. Its funny but can be serious. Keep it on!!

I LOVE Better Late Than Never! It is he best, funniest show ever! Please don’t cancel it.

I love this show. So funny.