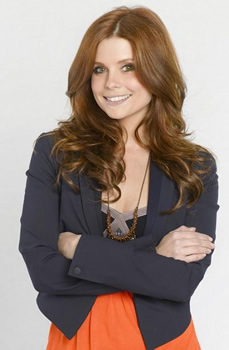 With the success of Modern Family (and to a lesser extent, The Middle), ABC is trying to round out their Wednesday block of comedy. They have several sitcoms in the pipeline and their first candidate, Better with You, has now premiered. Will it find success or, like last year’s Hank, be quickly cancelled?

Better with You revolves around members of the Putney family and their significant others. Maddie and Ben have been happily dating for a long time. They begin to question their choice to not get married when Maddie’s sister gets pregnant by her new boyfriend and they announce their plans for nuptials. The girls’ parents approve of the idea, having taken on a carpe diem approach to life. The sitcom stars Debra Jo Rupp, Jake Lacy, Jennifer Finnigan, Joanna Garcia, Josh Cooke, and Kurt Fuller.

On Wednesday night, Better with You scored a 2.5 rating in the 18-49 demographic and 7.9 million viewers. That put the series in fourth place for the coveted demo and third place in total viewership. It lost viewers from The Middle lead-in and likely benefited greatly from leading into the return of Modern Family (which got a 5.1 demo rating).

As is the case with CBS and their successful Monday night sitcoms, networks have high expectations when they team a new show with an already successful one. It’s hard to imagine that ABC is overly happy with the first outing of Better with You but they’ll surely give it some time to see if it catches on.

If the numbers don’t improve however, the execs will quickly start to wonder if they can do better with another new sitcom in that timeslot. We’ll have to wait and see.

But, what do you think? Is Better with You worth watching? Should ABC stick with it or cancel it and try another comedy?

Get rid of it. Keep THE DEFENDERS

To all the people who say give it a chance, why? Is it all of a sudden going to become funny? Is it a funny only in the middle of the season? Time to give something else a chance. Corny and bad just kills the comedy lineup for all the whole ABC evening. Pleasssse ABC cancel Better with you.

Boring, horrible, corny, and can’t believe it’s in the same line up with Modern Family, give it the axe!

I have tried this show but omg it is so boring I just wish it was over already, it is like torture having to watch this show just to wait for modern family, I say cancel it fast……please oh please………..

We love this show! Hope it continues. It’s funny to us!

I think it’s a great show. I watched the pilot episode, and at times it was lame, but then it improved. The firehouse and stuff are not really important because it’s a comedy and not a CW’s drama. Give ’em a chance. The couple situations are pretty real and the characters are sympathetic… 🙂

MY FAMILY AND I ENJOY THIS SHOW TREMENDOUSLY. WE LIKE JOSH COOKE SO MUCH AND WE ARE HAPPY TO SEE HIM BACK ON TV.JOANNA IS A DELIGHT AND DEBRAJO,JENNIFER,JAKE AND KURT ARE SUPERB. PLEASE DO DO NOT LET THIS SHOW TO BE CANCELLED. WE NEED THIS PEOPLE TO BE PART OF OUR LIVES, SPECIALLY RIGHT NOW THAT SO MANY UGLY THINGS ARE AROUND US.LOVE, LOVE, LOVE THIS SHOW.KUDOS, KUDOS AND MORE KUDOS.

I like the show & think it is quirky & cute. I also like the actors, I don’t need to know where they get money to redo warehouse & pay stuff. The show is meant to point out the funny quirks & differences between 3 relationships of different time together & somewhat generational. This makes it funny, to show us how a brand new couple, couple together 9 yrs & couple together for many long years are different & that is funny to me. Just something LIGHT & EASY. It isn’t complex just funny. Also for me modern family is… Read more »

Give this show some more time! It’s my new favorite! It’s sweet, clean and has some great one-liners. It’s a breath of fresh air for a comedy – no documentary style (sit in an office chair or couch and talk to the camera) show. Don’t get me wrong I like the Office and Modern Family as much as the next guy, but I’m enjoying the Putneys!

This show’s pretty funny and has some good family nuance and clean characters. Let’s give it some time and appreciate it before all that’s on TV is Survivor and Two and a Half Men.

“Better With You’ is perhaps the most sitcom-y sitcom out there right now, and I don’t mean that in a good way. Like the equally awful (yet unexplainably popular ‘How I Met Your Mother’), this show is totally contrived, with characters who are neither watchable or particularly appealing … actors who are simply reciting lines. It’s set-up, set-up, punchline may not be anything new, but neither is its tired ‘look how funny relationships can be’ premise.

This show Better with You isn’t funny at all. The lines are really corny. Without a laugh track you wouldn’t think its a comedy. It sad how this show still thinks the audience is too dumb to notice that ABC believes if you have a pretty woman say a line on TV it must be funny. That is pathetic. Modern Family doesn’t need cute actresses or, corny lines where everyone has a room temperature IQ, or a laugh track. These cheap moronic tactics are all Better with You has to use and the show is just not funny at all,… Read more »

ABC never promotes this show at all except for at the end of “The Middle” promos when “and catch ‘Better With You!'” is thrown out. That should tell you something.

I agree with Mindy, Mia and Casey are so unbelievable but it’s just plain unfunny, the only thing remotely funny is Debra Jo Rupp, I hope this show gets cancelled because it’s just an embarrasment. I’ve seen 2 full episodes and it’s time I’ll never get back.

What kills this show is that Mia and Casey’s relationship is totally unbelievable. You get no sense of why they’re so in love with each other. Mia comes off as a flaky spoiled brat while Casey is just an idiot. Who’s paying for the ultrasounds and the firehouse when it’s been established that neither of them has a real job? I remember reading that the show’s creator didn’t want to get caught up in doing back stories but in the case of Mia and Casey one is needed. BADLY.