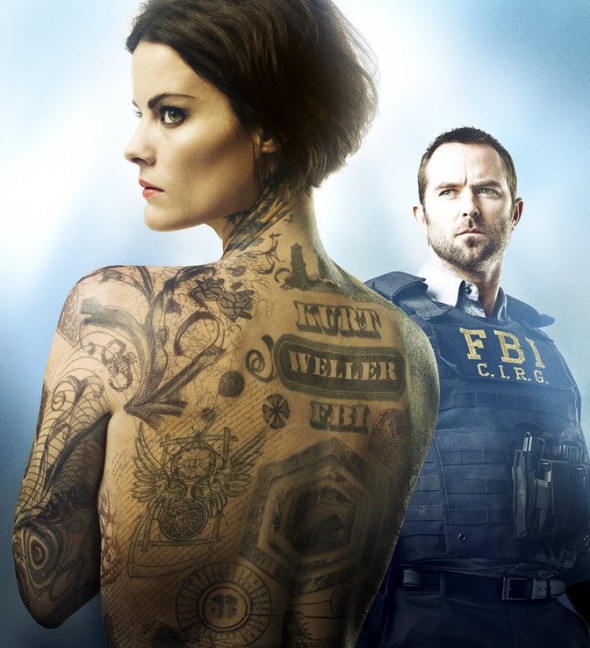 TV show description:
A high action police mystery/drama Jane Doe (Jaimie Alexander) is found inside a body bag left in Times Square marked for the attention of the FBI. The bag sparks a massive security alert; suspecting a bomb, the agents are shocked to see Jane appear naked, though with complex tattoos covering her entire body.

Having no memory and having no records of her existence the tattoos provide the only clues as to Jane’s identity. Supervising Agent Kurt Weller (Sullivan Stapleton) is brought in and is shocked to find his name inked on her back. With his past also somewhat of a mystery the pair quickly form a connection.

All the tattoos on her body are new bar one, a navy tattoo. The tattoo, her advanced tactical abilities, and language skills lead Weller to believe she may be ex-military. Which comes in useful as they happen upon a terrorist plot to bomb New York.

Psychologist Dr. Borden (Ukweli Roach) provides support for Jane, although fascinated by this unique case he is sensitive to the trauma suffered by his patient. In contrast, FBI Director Bethany Mayfair (Marianne Jean-Baptiste) may be hiding information as to Jane’s identity.

Trusting very few people, Weller and Jane must work together to unravel the road map on Jane’s body.

Series Finale:
Episode #100 — Iunne Ennui
Turn off your mind relax and float down stream…it is not dying…it is not dying.
First aired: July 23, 2020.

What do you think? Do you like the Blindspot TV show on NBC? Do you think it should have ended? Would you have watched a sixth season?

There are not a lot of good programs on tv that are not reruns. I like blindspot allot. I put it on my phone calendar just so I make sure I don’t miss it. Please keep it going.

I want to see if Jane really gets in trouble, or can she not, for hurting the leader, w/ a bullet..

Do not cancel. We love this show. One of the most interesting show on TV.

This is a great show! Different plot, great cast. Do NOT Cancel

I absolutely love this program… Do not cancel…
It’s clever, well written, and I love all the actors…
Please let it continue.

Cancel. At the same time, however, as she is the most interesting, most developed chacter having demonstrated intelligence, strength and courage, experienced personal loss and, this is a biggy, you can understand everything she says, a new series with Ashley Johnson in a similar, yet not identical, role would be most welcome. Providing, of course that she is the central chacter.

Trying to watch episode 15. Can’t hear the dialogue over the ridiculously loud background music. Same with episode 14. I can’t make out the plot due to loud music, turning it down so low I can’t hear it and from trying to fast forward through loudest sections – which now are almost all of them. I was really liking this show but will give up if this continues. Its painful. It would be wise for the producers to comment on this in the press so we would know they hear us and will fix it. Cause at this point, we… Read more »

Should be renewed. Has a great cast and the plot is different from other shows of this genre. I love it..!!

Obsessed with the show. Favorite show I watch! ♡♡♡♡

I have stopped watching this show because I can’t hear anything beyond the annoying loud music. We don’t need to be cued that it’s a dramatic event, like canned laughter on a sitcom. Ridiculous!!

The show would be fine if you would just lower that damn music a bit. It is so annoying to the point where we can barely hear what the actors are saying. Please do something about the background noise or cancel the series. You are ruining what show be an entertaining show.