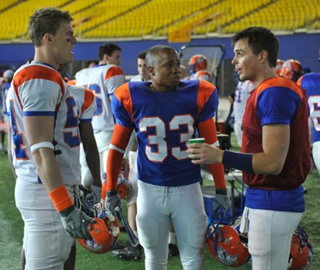 The game will keep going over at Spike. The cable channel has renewed the Blue Mountain State comedy series for a second year.

The show is produced by Lionsgate TV and Brian Robbins’ Varsity Pictures. Robbins produces Smallville and Jones and Ritchson are certainly familiar faces to fans of that CW series.

Created by Eric Falconer and Chris Romano, the show’s first season kicked off last month and is still airing. Last week’s episode attracted 810,000 viewers with a 0.4 rating in the 18-49 demographic. The 13th and final episode of the season is expected to air in late March.

But fans won’t be kept wondering if the show is coming back. THR is reporting that the series has already been renewed for a second season. A baker’s dozen of episodes have been ordered but its unknown right now when they’ll begin airing.

What do you think? Are you glad that Blue Mountain State will be returning for a second season?

This show is the funniest show I’ve seen in a long time. No other Collage comedy can compare, therefore this fan and many many others will be waiting for a 3rd season with the return of Thad Castle

This show is so funny the crazy things people do in college!Ha ha ha 🙂

THIS SHOW IS AMAZING!!! i was starting to freak out cause i thought it got cancelled. the show is quick to the joke i like that

GO GOATS GO!! haha this shows so great i cant get enough of it. Anyone with kids who complain about it being innapropriate…1. get over yourselves 2. dont let your kid stayup at 11 on a wednesday night and watch whatever they want all night… 3. adult humor is intended for adults and its up to you to be a parent because not everything in the world is appropriate for all age groups, never has never will be. get over it, BMS ROCKS!!!