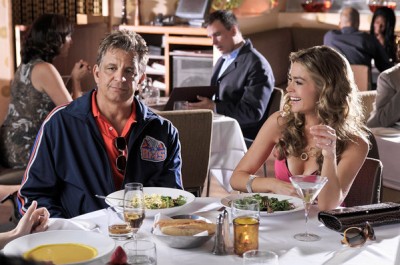 The game is over for Coach Daniels (Ed Marinaro) and his team. There won’t be a fourth season for Blue Mountain State. The Spike TV series has been cancelled.

The comedy series revolves around the on and off-field antics of Pennsylvania college football powerhouse, Blue Mountain State. Coach Daniels has his hands full with the hijynx of his wife (Denise Richards) and students like team captain Thad (Alan Ritchson), quarterback Alex (Darin Brooks), and team mascot Sammy (Chris Romano).

Total viewership dropped however in season three which kicked off this past September. While some episodes of season two had attracted 1.25 million viewers, at least one episode of season three garnered only half as many viewers. Spike TV aired the last two episodes of the season on November 30th. It turns out they’ll also be the last of the series as well.

Lionsgate, the studio that produces Blue Mountain State, apparently considered shopping the series to other outlets but it didn’t work out. The cast and crew were recently told that season four wouldn’t be happening.

While it’s been reported that the show was cancelled due to a decline in ratings, producer Eric Falconer says differently. He tweeted, “BMS wasn’t cancelled because of a drop in ratings. Season 3 was actually up 20% + in all male demographics vs S2. It was a budget issue.”

As recently as last week, Falconer was still hoping to hear that the show had been picked up for season four. However, it seems that State was actually living on borrowed time with Spike — even during season three. Last August, Spike TV executive VP Sharon Levy told Variety that the cable channel would be focusing on only non-scripted programming for the immediate future.

Of the cancellation news, Ritchson wrote, “Sad day for #BMS fans.” He followed that up with, “I can’t thank the dedicated cast, crew, and fans enough for all the love and support. Portraying Thad was a dream come true. I’m grateful.”

Brooks thanked the cast and crew and “everyone who made this show possible…a HUGE thank you!! Love you guys!!”

What do you think? Are you sorry that Blue Mountain State has been cancelled? Would you follow the show to another channel? Would you be interested in a BMS movie?

I’m always researching different websites and YouTube videos to get all the information I can about the possiblity of a season 4. Currently rewatching the way too short of a series I started wondering how all these shows like that 70s show and friends and multiple others, while great shows, have at least 7 seasons. They have no comparison to blue mountain state and it’s sad that it reached an end without even reaching Alex’s senior year! Thadland showed the destruction of the goat house which would make a great two more seasons at least! Season 4 “making a new… Read more »

Bring it back, with season 4!! After its popularity on Netflix the directors and writers of the show should pitch Netflix to pick it up at season 4 as they have with other good shows like “the killings”. I think Netflix would consider as it would be hugely popular and its a great show, very funny and on Netflix it would be uncensored!!! The show would kill it!

We WANT SEASON 4!!!! You can’t just leave it off at season 3!! We want to see Alex’s senior year!! I can not believe this

You are idiots for cancelling BMS

Loved the show when it first aired, been watching it ever since… seriously since it has been canceled I keep going back to watch every episode again and again. I wish you would get some balls and not let spike control you and pick a different network…. (netflix cross your mind)? And if so what’s the explanation?

Yes just like the episode were Sammy says “So quit bein a ***** and grow some balls. Stop letting them tell u what to do!!!”

Ive rewatched the series 3 times now and still gets funnier every time I see it.

PLEASE BRING BMS BACK FROM TURKEY…