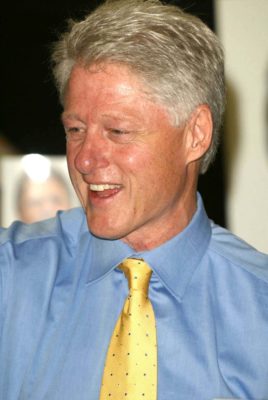 History is tackling one of the biggest scandals of the 1990s. This week, the network announced they’ve ordered a new TV show about Bill Clinton called The Breach.

Based on Peter Baker’s book of the same title, the scripted drama will chronicle Clinton’s impeachment trial and “how one of the nation’s biggest political scandals unfolded – from the revelation that President Clinton was having an affair with Monica Lewinsky, through the political combat that saw Hillary Clinton, Newt Gingrich, Prosecutor Ken Starr, Congressman Bob Livingston and many others dominating the national headlines.”

History has ordered six episodes of The Breach, which will be directed by The War Room producer R.J. Cutler.

New York, NY – September 14, 2017 – HISTORY has ordered the six-episode scripted drama series “The Breach: Inside the Impeachment of Bill Clinton,” it was announced today by Eli Lehrer, Executive Vice President of Programming, HISTORY. Based on Peter Baker’s New York Times bestseller, “The Breach: Inside the Impeachment and Trial of William Jefferson Clinton,” the series will be executive produced and directed by Emmy Award® winner R.J. Cutler and is from FremantleMedia North America in association with A+E Studios. Casting is currently underway.

A political thriller, “The Breach: Inside the Impeachment of Bill Clinton” is an intimate, riveting depiction of how one of the nation’s biggest political scandals unfolded – from the revelation that President Clinton was having an affair with Monica Lewinsky, through the political combat that saw Hillary Clinton, Newt Gingrich, Prosecutor Ken Starr, Congressman Bob Livingston and many others dominating the national headlines. “The Breach: Inside the Impeachment of Bill Clinton” is a day-by-day, and sometimes hour-by-hour, account of one of the most politically charged chapters in American political history.  For the first time, viewers will be taken inside Republican and Democrat war rooms, revealing the infighting among the President’s advisors, the secret back-channel negotiations between the White House and Congress, Tom DeLay’s strategy to force President Clinton out of office, and the Democrats’ pressure for Clinton to resign.  The aftershocks of this scandal still reverberate through the government and the world to this day.

“Featuring an array of well-known modern political figures, ‘The Breach’ will bring audiences behind the scenes of an event that changed Washington forever – the first impeachment of an elected president in American history,” said Lehrer. “This drama builds upon our core scripted programming slate of compelling, contemporary storytelling that embraces our recent history and we are confident R.J. will bring a unique vision to President Clinton’s gripping story.”

Cutler, who began his filmmaking career as producer of “The War Room,” the Academy Award® nominated documentary about President Clinton’s 1992 campaign for the White House, has directed a number of classic films about contemporary politics including the Emmy-nominated “A Perfect Candidate” and the critically acclaimed, “The World According to Dick Cheney.”

“Set at the dawn of the cable news wars and the social media revolution, ‘The Breach’ is a remarkable political story,” said Cutler. “It’s the origin tale of how our Government was broken and has never really healed. It’s also a thrilling tale of personal and professional ambition, of enormous hubris in the name of acquiring power, and of personal foibles, all of which nearly brought down a presidency.”

“This is a moment in American history that altered the direction of this country.  It’s a deeply emotional and personal story that caused one of the biggest political storms in our history,” said Dante Di Loreto, President of Scripted Entertainment, FremantleMedia North America. “FremantleMedia is home to some of the finest creative talent around the world.  We’re thrilled to now be partnering with R.J. and HISTORY on ‘The Breach.’”

What do you think? Are you interested in political history? Will you watch The Breach?