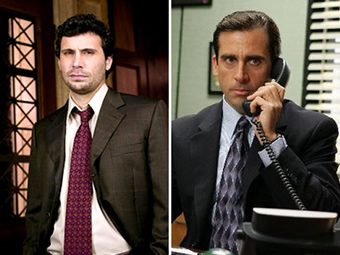 NBC has the biggest problems of the major networks. They had a lot of weak programming (including five nights a week of The Jay Leno Show) and so will have a lot of slots to fill next season. They’ve already renewed several borderline shows and let a lot of others go.

Here’s a listing of NBC TV shows with their current status. This list encompasses shows that have aired from July 1, 2009 through June 30, 2010.

Renewed
30 Rock: Tina Fey and company to return for season five.
America’s Got Talent: The talent competition returns this summer.
The Apprentice: The Donald will be back to bully more potential employees.
The Biggest Loser: More public weight loss in season 10.
Chuck: The adventures of the geeky spy continue in season four.
Community: Chevy Chase and the gang will be back for year two.
Dateline: It’ll be back next season on Friday nights and as needed elsewhere.
Friday Night Lights: It will be back for season five, the show’s last.
Law & Order: SVU: The spin-off will be back for year 12.
The Marriage Ref: Tom Papa comes back next season for year two.
Minute to Win It: Coming back for round two of more quick games.
The Office: No surprise that we’ll get season seven.
Parenthood: One of the few new NBC shows to get a sophomore renewal.
Parks and Recreation: Coming back for year three.
Who Do You Think You Are?: The genealogy show’s renewed for year two.

Cancelled (or ending)
The Great American Road Trip: No season two for the reality competition.
Here Come the Newlyweds: After two seasons, it’s over.
Heroes: No season five but hopefully a wrap-up movie will come instead.
The Jay Leno Show: An interesting experiment that was almost universally reviled.
Kings: This interesting drama didn’t find enough viewers.
I’m a Celebrity… Get Me Out of Here! One season on ABC, one on NBC. No more.
Law & Order: The granddaddy show ends after 20 seasons.
The Listener: This drama was renewed in Canada but cancelled in the US.
Mercy: Disappointing ratings meant no season two.
Merlin: The BBC export was cancelled by NBC but picked up by Syfy.
The Philanthropist: “The Complete Series” was released on DVD in January.
Southland: NBC cancelled it but TNT picked it up and later ordered season three.
The Tonight Show with Conan O’Brien: It didn’t live up to expectations and O’Brien and the network parted ways.
Trauma: Ended after 18 episodes.

What do you think? Any news that makes you particularly happy or sad? Surprised? When compared to other networks, is NBC better or worse about cancelling shows?

They should have kept Great American Road Trip! It was fun to watch

Yeah, I’m super numbed a out Trauma and Mercy!=) Maybe there should be an online vote before a show gets canceled?

DVR has no impact on if a show is canceled or not, NBC doesn’t even know if your watching a show unless your home was chosen as a Nielsen ratings home. Which you would know if you were.

Don’t worry I am sure Mercy, Trauma, Hawthorne, ER, will all be replaced by another average medical drama or two in the future.

I will never watch another NBC program. The way they ended Mercy was just horrible. Yes, I did DVR it. Should we only DVR the programs we don’t like so they will be eliminated? What a novel idea.

Out of the shows you chose to keep I only watch one of them, so guess I don’t have to worry about DVR’ing anything this coming season.

@Sophie who are you talking to, NBC canceled the shows this is not NBC. So I think your comments are misplaced.

I can’t believe you canceled Mercy and Trauma. It seems you cancel he good stuff and leave some of the worst junk on. It is getts so that I am watching other channels and not watching NBC anymore. I don’t know who you have that picks the shows but you need someone who listens to the public more. Where do you get your ratings from?

find it funny they cancel mercy but leave half the dumb reality shows going. If they wouldnt have made mercy episodes so choppy and more frequent people may have watched it more but when you got to wait 3 weeks for one episode then another 2 weeks people dont get as interested and they tend to look for other things to watch i think they should keep mercy and make it more stable then they will get the ratings they want.

I agree, They put all the specials in. Like pageants, and awards in Mercy time slots. So found it hard to know when they where on from week to week. Glad I have a dvr to help remember for me.

How could they cancel Mercy??!? The finale left too many questions unanswered for it to not be coming back. Ugh! I am glad Parenthood got renewed-I love the chemistry between the characters.

Oh and I agree Mercy was there best show and heroes close by. Too bad they get rid of everything good.

I personally think NBC has made terrible decisions. Therefore I bet there are many people just like me that wont watch more then one show they host.

I only watched Heroes, Chuck and the Office out of all the shows NBC has. You could not pay me to watch any of the others. I hate reality shows. The only Law and Order I watch is the one with Jeff Goldblum and I think that’s on a different channel.

Bring back Heroes and Mercy! Those are two of my very FAVORITE shows!!!!