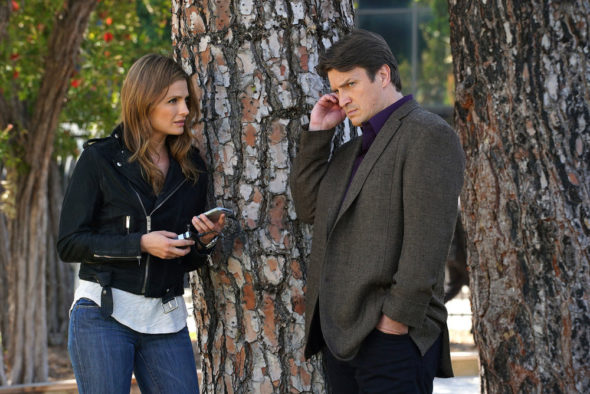 This evening, ABC aired the series finale of Castle. After eight seasons and 173 episodes, the Monday night drama came to an end. While fans of the show will surely miss Rick (Nathan Fillion) and Beckett (Stana Katic), it turns out that the cancellation might have been a good thing for the show’s legacy. SPOILERS AHEAD.

In the final moments of the last episode, Rick and Beckett were shot by Caleb (Kris Polaha). While Beckett was able to take out their assailant, the beloved couple was gravely injured. It looked like this could be the end but the finale’s final moments flashed forward seven years into the future and showed the couple with their three children. A happy ending.

The final scene was an alternate ending. Had ABC renewed Castle for a ninth season, the episode would have ended quite differently — and likely not happily.

Due to budget cuts, Katic (and Tamala Jones) wouldn’t have been a part of season nine. Based on the rest of tonight’s series finale, it seems likely that Rick Castle would have continued on in season nine — as a widower.

Considering that the relationship of Rick and Beckett has always been at the core of the series, it’s hard to imagine that many fans would have embraced that development and it could have ended up being a sad finish to a beloved series. For once, perhaps a show’s cancellation was a good thing.

But, what do you think? Would you have liked to see a ninth season — without Beckett? Was the cancellation a good thing? Would you like to see the characters return some day?

Not happy, my husband and I enjoyed the show. However, would not have enjoyed it without Rick and Becket together. That is what made the show for us to see the two overcome life ups and downs. The whole cast made the show fun to watch. Did appreciate the ending showing Rick and Becket seven years later; the happy ending made it less disappointing.

Moving forward we wish the best to the cast and crew and thank you for coming into our home.

No, my favorite show! (less Becket may have caused lower ratings) Bad day in “Mudville” when my sister gave me the news. Please bring it back!

Should have at least tried one more season of Castle. I always hoped they would bring back his Dad more. There was more to explore. IMO

My lovely wife and I were not happy campers when we found out the show was being cancelled. We thought it was one of the top five shows on TV. It was probably one of the directors that did not like something one of the main actors did or said. Guess they do cut off their noses to spite their faces.

Why not just make another show but make it about beckett

I hit the wrong button!! I definitely wanted the series to continue!! One of my top five favorite shows!!!

I can’t believe it. Don’t understand why. I am going to miss this show. Not just the main characters, but all of them. Please bring them back.

this was a great show and Nathan Fillion is a leading man who could have easily held it together .I loved Casket and I don’t understand why they did this but the show would have had a lot more stories to tell

I can’t believe it! I love this show and never miss it even during the bad writing last season. I would love to see a ninth season, both me and my husband.

Not happy with the thrown together ending, if it was an ending! Buger cuts my a$$, how can a budget cut be the end of a successful series when they make that much money per episode?? Threatening to end season 9 tragically or have this “alternative” ending to season 8 as a consolation was almost a slap in the face!!!

If it wasn’t for this stupid budget cuts, it could’ve continued. Why is ABC/Freeform (or whatever they like to call themselves) so stupid to ruin a very good running [and by fans loved] show?! If it wasn’t for that stupid self-reinventing thing, that most likely wouldn’t have happened.

OR: Just don’t start another couple of shows [that might or might not run well] in favor of contueing established ones (not just ABC, all other’s as well). And/Or give fan-favorites another season, even if the ratings aren’t perfect – also instead of cancelling and adding new shows.

A 9th season sans Becket would have been too weird. Glad it ended but that ending felt so tacked on and unsatisfying. Wish ABC would have just decided when Season 8 was ordered to make it the final season and let the writers do a proper finale.

I can’t believe it. We had read that it was going to be renewed but without Beckett and then we watched it and asked each other – What happened??? We would have watched a Season 9 without Beckett. We love Castle and his mother and daughter. It could have continued and still been a good show. This will be a show sorely missed.

Wrap it all up: A final tv movie with the characters from “Time Will Tell”, Beckett as senator, Castle writing non-fiction and their 3 children. They are pulled back in for one last case to save “deChile” after 15+ years.

NO! I enjoyed the show. It was one of the last sensible shows left on television. No more Law and Order, no more CSI and now no more Castle!

Law and Order SVU is still air but CSI just canceled called Cyber last in the series of shows also Castle did it time on air heard was good all and all need end eventually will end if didn’t end right away.

Rick & Castle together forever??
shouldn’t it be Rick & Kate? or Rick & Beckett??

Yes. Thanks for spotting that.