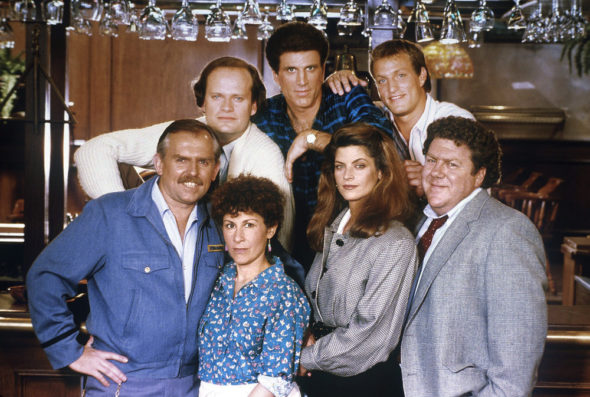 We all know about Frasier, but what about the Cheers spin-offs that didn’t happen? Recently, creators James Burrows, Glen Charles, and Les Charles spoke with Variety about the legacy of the NBC TV show.

Levine: We got approached several times to write a Norm and Cliff show. But we just didn’t want to do that. It’s a problem, especially with Norm, because you had a character who was blissfully happy just sitting in a bar doing nothing for 16 hours a day. Unless you have characters who have tremendous desires and goals and things they need to achieve, and you can throw hurdles to make it that much harder for them, it’s very difficult to come up with stories.”

And what about a reboot? Both James Burrows and Glen Charles agreed it might not work since the show ended so long ago:

Burrows: Since I’m involved with the “Will & Grace” reboot, I’ve seen it work. But that was 10 years, and this would be 25 years. I think that’s too long. You want to make sure when you do a reboot that you remember the characters as they were when they were successful.

Glen: “Will & Grace” and “Roseanne” — those people don’t seem to have aged significantly. Our people, I know, have. So it just wouldn’t be the same. And I’m not quite sure what that story would be. An aging bartender chasing women would be very strange. It wouldn’t feel right.”

What do you think? Are you a fan of Cheers? Would you watch a reboot?

I think a reboot of where everyone’s lives has gone to in their older ages would work quite well. It would be much better than most of the current shows on today!!

I would be interested in watching a limited run or single episode special to see where the characters are in their lives.
I agree with the creators that a reboot would not work after 20+ years.