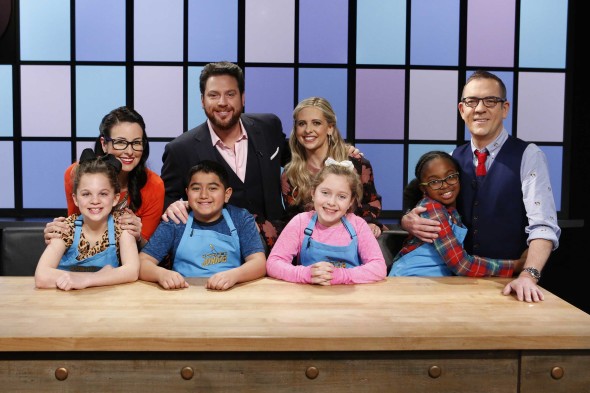 The kids are back in the kitchen! Food Network just announced the TV show will return for a new season in June.

Hosted by Tim Allen, the culinary competition series pits kids against one another in a series of cooking-related challenges. The new season will feature guest appearances by Jessica Alba, Anthony Anderson, Nikki Bella, Kardea Brown, Clinton Kelly, and Bailee Madison.

The new season of Chopped Junior premieres on Food Network on June 25th at 8 p.m. ET/PT.

NEW YORK – May 23, 2019 – Junior cooking dynamos step into the Chopped kitchen to showcase their culinary skills in the new season of Chopped Junior, premiering Tuesday, June 25th at 9pm ET/PT on Food Network. Through six one-hour episodes, the junior chefs must create delectable dishes utilizing ingredients within the mystery baskets over three rounds – appetizer, entrée, and dessert – with a limited amount of time to earn the elusive Chopped Junior chef coat and a $10,000 grand prize. Hosted by Ted Allen, these young cooks must prove they are wise beyond their years with their culinary chops. Special guests join the recurring Chopped judges at the table to determine who will be eliminated, including Jessica Alba, Anthony Anderson, Nikki Bella, Kardea Brown, Clinton Kelly, and Bailee Madison.

“Chopped Junior is a destination for families to watch the extraordinary skills of these talented young competitors, who continually inspire new generations to get into the kitchen,” said Courtney White, President, Food Network. “With great special guest judges and even more daunting mystery ingredients, we could not be more excited to premiere new episodes and give viewers more of what they have come to love.”

In the premiere episode, four young cooks step out of their home kitchens and into the spotlight, as they must work with beef tongue in the appetizer basket. The fearless kids who move on to the second round get a cool treat of orange cream smoothies in the entrée basket, and the last two competitors discover whether a giant lollipop and an odd sandwich make for a winning dessert. Chopped judges Scott Conant and Amanda Freitag are joined by guest judge Jessica Alba to determine who is crowned the episode’s Chopped Junior champion! During the season the junior chefs must contend with the wackiest of ingredients, including alligator tenderloin for the appetizer basket and corn on the cob lemonade in an entrée round; and in another episode the four talented kids must embrace their inner superheroes as they take on baskets inspired by the movie Spider-Man: Far From Home. Each mystery basket contains ingredients from a particular country that Spider-Man visits during his action-packed European adventure in the film. The tour for the junior chefs’ taste buds begins with a stint in Italy for the appetizer basket. German adventures in the entrée round challenge the kids to figure out what to do with apfelstrudel. And will English breakfast tea in the dessert basket awaken the judges’ senses?

Viewers can go behind the scenes of the competition, get a tour of the kid-friendly pantry, and learn the judges’ best advice for the junior chefs at FoodNetwork.com/ChoppedJunior. Join the conversation on social media using #ChoppedJunior.”

What do you think? Are you a fan of Chopped Junior? Will you watch the new season?