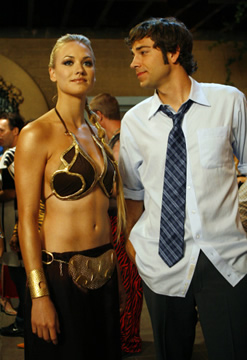 If “low ratings” are saving Chuck from cancellation, then fine. It’s one of the sweetest shows on TV right now – fun, funny, action-packed. Stop cancelling everything for more reality crap and maybe people would stick around.

I have 2 boys ages 14 and 9 who LOVE Chuck. We plan our Monday’s around watching it together. Everything on major networks seems to be too violent, sexual or dark. there is enough of that in real life. Chuck is light and just plain fun. Yes, its silly, but thats what makes it fun to watch, especially with kids. The violence is mild enough for my 9 year old and its funny enough to have my husband and I laughing. There are so few shows today that are kid friendly and that everyone in the family enjoys. It would… Read more »

I just love Chuck. I hope it is renewed for the next 20 years. It is so enjoyable and the actors are really great, as well as the story line.

My thoughts on why Chuck has been picked up for 11 more episodes. One, it gives the writers a chance to plan a series finale in May. Second, it will have enough episodes or close enough for weekday syndication. And third, producer Warner Bros. must have lower some of the licensing fees to squeeze out a few more episodes. Chuck is a fun show, but these are good reasons.

What a disaster. They should have cancelled them all and brought back Law & Order. Between now and the end of the year they could build the station set again and be filming episodes. Instead, they renew not one, not two, not three, but four disasterous shows which no one is watching.

I like Chase but hate the 10pm timeslot because I work at 6am and can’t stay up that late.
but I can usually catch the reruns on Sat’s.

I love watching Chuck, overall all the episodes are very enjoyable and the actor’s in it are likeable.. I usually watch on TV though occasionally watch on Hulu if the football game is good.

Havent seen Chase, looks decent but just havent bothered with it since I watch Castle.

Chase is in bad time slot, against already-established Castle, and newbie hit Hawaii 5-0. I’ve watched all three, and am now watching Chase, so that could spell doom for the show, as I swear if I like a show, the networks kill it and keep the crap on instead.

Castle I’ll catch in repeats. Hawaii Five-O is, well, it’s okay but I find the characters more fascinating on Chase.

Having 3 action type shows against each other makes no sense. Move NBC’s Parenthood into the MOnday slot, give Chase the Tuesday slot.

Yeah I’m confused. I completely don’t get it. They didn’t renew Trauma or Mercy, so is it likely if Mercy and Trauma just waited a year, then they would have been successful? Who know’s right, water under the bridge right? That’s done. But still you have to wonder. Or did NBC simply not want to repeat last season? You just gotta wonder.

@Jeremy Rynek: Trauma and Mercy both got additional episode orders last season so actually, this is like a repeat of last season.

how is it a waste of time for everyone?
if you don’t like it, don’t watch it.

I do the opposite. I watch Chase and DVR Castle and watch it when I can.

if they end up canceling chuck, they need to finish out the story. although i dont really want them to cancel it.

I watch Castle during the time slot that Chase is on. Then I watch Chase the next day online. Too bad they have no way of measuring that unless they measure the hits on the episode web page. I am watching House during the Chuck time slot and do the same with it although not as steady. I have lost interest in that story line.