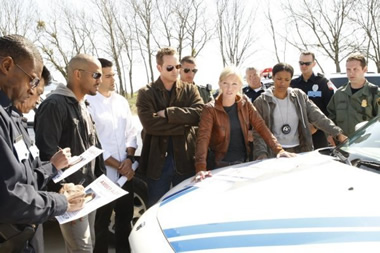 If you were looking forward to watching Chase tonight on NBC — well, sorry. The episode’s been pre-empted by yet another two-hour edition of Minute to Win It. As you may recall, the network did the same thing back on January 12th.

Tonight’s edition of Minute to Win It is called “Kids Rule” and will air from 8-10pm. “Father Figure,” the 14th episode of Chase that was supposed to air tonight, has been rescheduled for next Wednesday, February 9th.

Chase has been struggling in the ratings, first on Monday nights and now on Wednesdays. It’s currently the lowest-rated scripted series on NBC, averaging just a 1.5 rating in the 18-49 demographic and 5.54 million total viewers.

NBC ordered a full 22 episode season back in October but the network cut that order back to 18 installments in December.

Counting next week’s episode, there are five installments of Chase left in this season. It’s not expected to be renewed for a second year.

Has anyone seen any new episodes of Chase? I saw a few as the season JUST started and now it has not been in on in the last few weeks. I looked through my guide and it doesn’t show any new episodes coming on at all. What happened? It has been such a great show to watch. Finally something good on! I really hope it doesn’t get cancelled…we need to know what is going to happen to Daisy and if Luke and Daisy will pursue a real relationship! Also, if Annie and Jimmy are gonna ever stop denying their feelings… Read more »

For the second week in a row Chase was pre-empted. Last week with St. Judes and this week with golf. Has anyone else had this problem? I was able to watch it online but my daughte and I watch it together which makes it difficult.

I really hope they keep Chase it’s a very good show, one of the few I actually watch.

I’ve been waiting to watch the show! The problem with ratings is that they keep changing its slot OR they put it up against other networks big shows, and that is just asking for failure.

Thank you for bringing Chase back! Definitely one of the best written shows on any network. Let’s hope it’s comeback is permanent!

Bring it back! That show rocked!

TNT picked up Southland after NBC wimped out saying Southland was ‘eeeeew! too gritty!’ and the show has done great and is far more gritty… you can cuss on TNT!

Maybe they could do the same thing with ‘Chase’. Show has a great cast including ‘High Incident’ and ‘Prison Break’ alum. The female lead is particularly captivating in her body armor with the bare midriff…

Being an x-cop my wife and I really enjoyed this show.

“Chase” is one of the FEW good shows, so naturally they will drop it. I have never seen such garbage as I am seeing on TV, except for “Chase” and a few other shows, like “Blue Bloods”. I looked forward to watching “Chase”, and I am disgusted with the poor judgements of idiots who push no-count shows that nobody watches.

minute to blow it show sucks put chase back on.

Chase was great. Maybe another time slot? Ive been looking forward its return.

I hope CBS picks up Chase…or any other network that actually has regular viewers. Every time I find a show I like on NBC, they cancel it. I recall someone saying the acronym NBC stands for NoBody Cares…guess they’re proving again they don’t care what their viewers want.