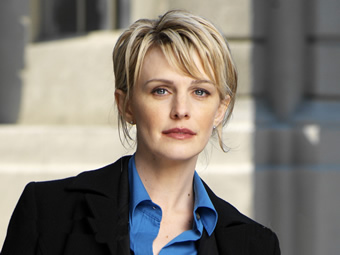 After seven years on the beat, the show’s over for Detective Lily Rush (Kathryn Morris). CBS has officially cancelled Cold Case.

Each episode of Cold Case begins by showing an unsolved crime from the past. The scene then flashes forward to the present day and a group of homicide detectives try to piece together what really happened, using old evidence and new interviews. The series stars Morris, Danny Pino, John Finn, Jeremy Ratchford, Thom Barry, and Tracie Thoms.

Cold Case began in September of 2003 and quickly became a staple of the CBS Sunday night schedule. The crime drama had a successful first season and, by season two, was averaging a 3.5 rating in the 18-49 demographic and 15.1 million viewers. For the next couple seasons, total viewership fell a bit but the all-important demo numbers rose, reaching a 3.8 in season four.

Unfortunately the ratings have come down quite a bit since then. In season five, the show averaged a 2.9 rating and about 12 million viewers. Last season, Cold Case sank lower, to an average of a 2.7 rating and CBS made a choice between renewing ailing Without a Trace or Cold Case. They chose to keep Cold Case but may have regretted it pretty quickly. This season, the show’s ratings dropped even further to a 2.15 rating in the 18-49 demographic and 9.6 million viewers.

So, while the overall viewership isn’t terrible, the demo numbers are and that’s what brings the ad dollars. CBS often has the most total viewers, but they are often lacking in the 18-49 demo department.

To no surprise, CBS has cancelled Cold Case after seven years on the air. The show won’t be back for season eight next fall. Sadly, the show is not available on DVD. It’s believed that securing the rights for the show’s extensive use of period music is problematic.

What do you think? Are you sorry to see the series go? What could have been done to help the TV show’s ratings?

My whole family watched cold case show all the time. But most people in hawaii work 2-3 jobs, and every time they move the time we were working, so we decided to try and get the DVD but unfortunately can not find it….

I wish it was not cxled.

I used to watch this show all the time but never got to watch all of them, My favorite episode was season 3 episode 9 “A Perfect Day”. Please come back and air again or at least to netflix.

I did not watch this show originally. Started watching on ion television. Please bring it back. I wish I had known how great a show it was. Now I do. Come back to ion. I will watch it late night. Just like I did psych.

I’m not a big TV person. But I was off work for some months after having surgery. That when I learned about this show. It became addictive. The show bacame a norm for me and my son. I still haven’t seen some of the older episodes. We was so hurt to find out it was off the air. Nor could I find any recordings. My sons looked for recording of the season’s as a gift for me. Now I read it was never happening. Please start showing this show again. Starting from season 1. It would be appreciated.

Bring it back or atleast show reruns

It was one of the first original idea shows that showed cases being solved and flashing back and forth in the time it took place and playing the music with it. No one has done anything so clever since. I don’t know where they got their numbers but cold case was great. A show to look forward too. I wish you’d bring it back,it’s not like you’ll ever run out of material cold cases get solved all the time. Please bring it back .

I miss watching this show. Why can’t they show it as reruns like they do with Law and Order. It was a great show. I can’t believe it’s been cancelled.

Bring back the reruns

I love this show please bring it back!!

I love Cold Case still today. I wish it had stuck around. I’ve seen every single episode and now 7 years later would still love to see a season 8 happen! Bring it back!

Bring Cold Case Back!!! Since the show, in real life, law-enforcement have been opening more and more cold cases. This show gives Forensic Science majors a whole reason to why it is a growing college major. The show rocks by playing good music in the midst of the settings. All the actors(ess) played the part right!! CBS need to think $$$$$$ & viewers. Take a game or reality show to trade off.

I’m sorry it’s cancelled. We miss it. I watch the old episodes over and over.

I’m very sorry to see it go. I watch the old episodes. Channel 2 should bring it back