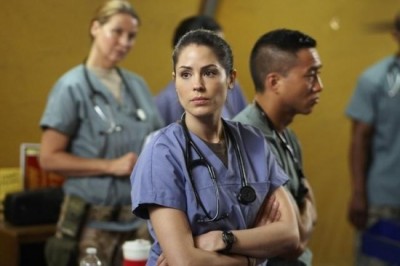 ABC’s medical TV show, Combat Hospital, has been cancelled after one season on the air. Though the show had plenty of fans, the demise certainly doesn’t come as a surprise.

The TV show debuted in June 2011 to a disappointing 1.2 rating in the 18-49 demographic with 5.32 million total viewers. The second episode of Combat Hospital dropped 8% in the demo and the following week’s installment fell another 9%. Week four then dropped 20% — to a 0.8 demo rating.

The first season ended up averaging a 0.9 rating in the demo with just 3.82 million viewers. ABC had purchased 13 episodes of season one from Canada’s Shaw Media but opted to only air 12 of them. The series performed well on Canada’s Global network but was a disappointment in the US. It was no shock when ABC decided that they didn’t want to order a second season.

Once word came down that ABC wasn’t interested in the show any longer, Shaw (who also produces Rookie Blue) tried to find another partner here in the states to help offset some of the production costs. Those efforts were unsuccessful and the show was officially cancelled.

On the positive side, there’s word that Combat Hospital will be released on DVD so fans here in the United States will be able to see and own all 13 episodes.

What do you think? Are you sorry that there won’t be a season two for Combat Hospital?

Hey look at the IDIOT we Americans voted for…think we can pick a good TV show? I liked it too. Don’t count on Americans for brains on good shows…

What total BS! A decent, well-produced Canadian series cancelled….but all those mindless reality shows keep on surfacing. Why do we have to be so dependent on US audience’s appetite for visual garbage.

We loved this show. I can’t believed it was canceled. Must have cost more money to produce than a bunch of Americans destroying our Yukon (not Klondike) for gold now there is a stupid show

Hi.. I’m from Malaysia..
i love to watch this drama..
our national television network has showed it on TV since november 2013..
so sad when the producer cancelled the season two..
hey man, even i’m from malaysia love to watch it.. don’t stop making Combat Hospital.. at least, make the happy ending story..
i’m hope the producer see this comment..
Thank You..

I also loved this show and I also love Rookie Blue. To be honest I only watch the shows I like and forget TV. I absolutely HATE WITH A PASSION ALL THE CRAP OF REALITY SHOWS. ENOUGH IS ENOUGH. I tape the shows I watch so I can skip through the ads. I watch the old shows that have a moral standard. None out there today
and that is why society as a whole is going to Hell fast.

I loved it!!! wish it would be renewed…

Garbage! I loved this series, it was great. It is reminiscent of MASH and I was SO looking forward to a second season. Boo on you ABC.

Combat hospital was a fantastic show that, in my opinion showed the real side of war that most people here in the US do not see or understand. I don’t know where ABC is getting their information from but, everyone I have talked to said they loved the show. And it is a real disapointment that great shows like this are cancelled when stupid shows continue on. It’s a real shame.

Loved the show. I agree with some of the other comments, like let’s get rid of half the rediculous reality shows and keep the shows that are really good

That stinks! It was an awesome show, completely different from anything else on TV!

Loved combat hospital. I wasn’t in their polls…no one asked me or anyone I know. Get rid of some of the reality shows and put on some shows with good content. Like someone else said, I’m about ready to cancel cable. No reason to keep it if there’s nothing good on to watch

I thought Combat hospital and Off the Map were great shows. And oh by the way your demographics aren’t accurate since I am 55 years old, not 49!!