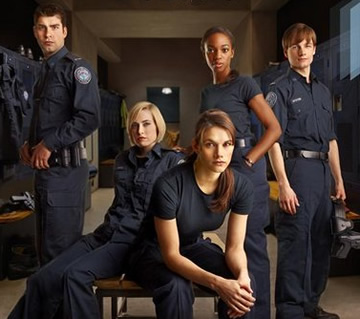 The alphabet network has announced their summer 2011 schedule. Highlights include the returns of Wipeout, Rookie Blue, The Bachelorette, and Bachelor Pad, as well as the premieres of Extreme Makeover: Weight Loss Edition, 101 Ways to Leave a Game Show, Expedition Impossible, The Hot Zone, Take the Money and Run, and America’s Karaoke Challenge.

Following is a list of the upcoming summer programming in chronological order (all times ET):

THE BACHELORETTE – PREMIERES MONDAY, MAY 23 (9:00-11:00 p.m.), AND MOVES TO ITS REGULAR TIME SLOT (8:00-10:01 p.m.) ON MONDAY, MAY 30 – Ashley Hebert, 26, couldn’t admit she was in love with Brad Womack – and it might have cost her the final rose – but that’s all in the past. The energetic and vivacious Hebert, who is ready to start a new life with a soul mate she might soon meet, will get a second chance at love when she stars in the seventh edition of “The Bachelorette.” Hosted by Chris Harrison, “The Bachelorette” is produced by Next Entertainment in association with Warner Horizon Television. Mike Fleiss and Martin Hilton are the executive producers.

EXTREME MAKEOVER: WEIGHT LOSS EDITION – PREMIERES MONDAY, MAY 30 (10:01-11:00 p.m.) – In a unique, non-competitive show about weight loss – unlike anything seen before on television – “Extreme Makeover: Weight Loss Edition” will document the amazing makeover of eight courageous, “super obese” people. Shot over an unprecedented 365 days, the participants set out to safely lose half of their body weight, ultimately revealing an amazing metamorphosis. The term “super obese” defines those who exceed their estimated ideal weight by approximately 225 percent and who are roughly 200 pounds or more overweight. Trainer and transformation specialist Chris Powell (“The 640-Pound Virgin”) will guide each of eight participants through their transformation process by moving into their homes with their families or loved ones. By assuring that they have the proper nourishment and exercise movement, Chris will provide a fresh perspective to individuals whose lives have become unmanageable because of their weight. In each of the eight one-hour episodes, the participants undergo a transformation not only of their bodies, but of who they are as individuals. Each stand-alone episode of the series will chronicle one participant’s journey to reclaim his or her life. From the producers of “The Biggest Loser,” “Extreme Makeover: Weight Loss Edition” is executive-produced by JD Roth, Todd A. Nelson and Matt Assmus. The series is produced by 3 Ball Productions/Eyeworks USA.

101 WAYS TO LEAVE A GAME SHOW – PREMIERES THURSDAY, JUNE 16 (9:00-10:00 p.m.) – “101 Ways to Leave a Game Show” will feature contestants competing in one of the most insane game shows in history for a chance to win $50,000. In “101 Ways,” contestants will match wits in a series of multiple choice questions, with one contestant being eliminated every round. But unlike any other game show in the world, the eliminated contestant will then be ejected from the show in spectacular fashion — i.e., being flown away strapped to the wing of a biplane, pushed off the top of a moving semi truck, dragged underwater by a one-ton anchor or yanked off a dock by a speed boat. The show will be hosted by Jeff Sutphen (“BrainSurge”). Produced by Endemol USA, Matt Kunitz (“Wipeout”, “Fear Factor”) will serve as the executive producer.

ROOKIE BLUE – PREMIERES THURSDAY, JUNE 16 (10:00-11:00 p.m.) -Take a candid look inside the professional and personal lives of five rookie cops as they navigate their first years on the job in this one-hour drama. During last summer’s premiere season, these rookies hit the streets for the first time with their training officers and learned how to walk the thin blue line. Now the training wheels are off – more experienced, they’re ready to kick some serious butt. But these rookies are just beginning to realize there are no shortcuts to becoming good at this job. And when you’re a rookie officer, a little knowledge is a dangerous thing. “Rookie Blue” stars Missy Peregrym as Andy McNally, Gregory Smith as Dov Epstein, Charlotte Sullivan as Gail Peck, Enuka Okuma as Traci Nash, Travis Milne as Chris Diaz, Ben Bass as Sam Swarek and Eric Johnson as Detective Luke Callaghan. Tassie Cameron, Ilana Frank, David Wellington, Noreen Halpern and John Morayniss are the executive producers. “Rookie Blue” is produced by Thump Inc. and Entertainment One.

EXPEDITION IMPOSSIBLE – PREMIERES TUESDAY, JUNE 21 (9:00-10:00 p.m.) – Adventurer, zoologist, big cat trainer and all-around risk taker Dave Salmoni hosts ABC’s epic summer series, “Expedition Impossible,” which features ordinary people doing the extraordinary in the biggest adventure of their lives. The show will feature 13 teams of 3, racing on an expedition across vast deserts, over snow capped mountains and through raging rivers. Each week a new stage of the expedition will be revealed to the teams. Will they crumble under the pressure of having to think clearly in the wilds of the great outdoors, or will they find a way to work together to complete their adventures? After 10 stunning legs of competition, one team will cross the finish line first to claim victory. Mark Burnett and Lisa Hennessy serve as executive producers. Both the television show and format will be distributed internationally by Mark Burnett International Distribution.

THE HOT ZONE — PREMIERES TUESDAY, JUNE 21 (10:00-11:00 p.m.) – This new drama is set in 2006 at the only military hospital providing advanced surgical care in all of Southern Afghanistan, and charts the frantic lives of the hospital’s resident doctors and nurses from Canada, America, the U.K. and other allied countries. This highly-charged series follows the characters as they navigate through the relentless life-and-death battles on the operating table and the never-ending conflicts that arise from working in a war zone military hospital. “The Hot Zone” stars Elias Koteas (“The Curious Case of Benjamin Button”) as Colonel Marks, Michelle Borth (“Hawaii Five-0”) as Canadian surgeon Dr. Rebecca Gordon, Luke Mably (“The Gates”) as neurosurgeon Dr. Simon Hill, Deborah Kara Unger (“The Hurricane”) as Australian army psychiatrist Major Ada Pedersen, Terry Chen (“Sanctuary”) as trauma team leader Captain Bobby Trang and Arnold Pinnock (“The Listener”) as Commander Will Royal, Chief of Nursing. “The Hot Zone” is a production from Canada’s Sienna Films and the U.K.’s Artists Studio. Academy Award(R)-nominated Daniel Petrie Jr. is executive producer and showrunner. Executive producers are Jennifer Kawaja and Julia Sereny for Sienna Films, Gub Neal, Justin Thomson-Glover and Patrick Irwin for U.K.-based Artists Studio, as well as Simon Vaughan of Lookout Point. “The Hot Zone” was created by Jinder Oujla-Chalmers and Douglas Steinberg.

TAKE THE MONEY AND RUN — PREMIERES THURSDAY, JULY 28 (9:00-10:00 p.m.) — From the producers of “The Amazing Race” and the “CSI” franchise comes an entirely new heart-stopping competition show. Combining all the elements of an edge-of-your-seat spy thriller with the excitement of rooting for real people in various locales outwitting high-level investigators, “Take the Money and Run” is an exhilarating competition series that will take reality television to a whole new level. The cat and mouse format will pit investigative professionals against everyday people trying to win a $100,000 prize. “Take the Money and Run” is produced by Profiles Television LLC and Jerry Bruckheimer Television, and distributed in the U.S. by Horizon Alternative Television. Executive producers are Jerry Bruckheimer, Bertram van Munster, Jonathan Littman, Elise Doganieri and Philip Morrow. KristieAnne Reed and Mark Dziak are co-executive producers.

BACHELOR PAD — PREMIERES MONDAY, AUGUST 8 (8:00-10:00 p.m.) — Fan-favorites, arch-rivals, villains and the sexiest participants from the hugely successful “Bachelor” franchise reunite under one roof in a competitive reality series for a “second chance” at love as ABC’s “Bachelor Pad” returns for a second season. Who among Bachelors and Bachelorettes past will rekindle old flames and ignite new ones? “The Bachelor,” “The Bachelorette” and “Bachelor Pad” are all produced by Next Entertainment in association with Warner Horizon. Chris Harrison (“The Bachelor” and “The Bachelorette”) hosts.

AMERICA’S KARAOKE CHALLENGE – PREMIERES MONDAY, AUGUST 8 (10:00-11:00 p.m.) – This summer ABC brings viewers the amazing story of a competition that draws thousands of the most talented singers together in the ultimate sing-off – the Karaoke World Championships USA. It’s a battle of performances from America’s biggest karaoke competition that will crown a new king and queen of karaoke. Produced by Lincoln Square Productions for ABC.

What do you think? Are you looking forward to any of these new or returning series?

I wonder who decide to cancel solid shows like Body of Proof. Perhaps those who decide should have thrie contracts reviewed.

I’M WITH YOU ALL, I’LL BE WATCHING ROOKIE BLUE & MAYBE THE HOT ZONE, BUT ALL THESE SO CALLED REALITY SHOWS, THEIR ALL SCRIPTED IN ONE WAY OR A NOTHER. LOOK AT, THE HILLS, THE CITY, THE REAL O.C. AND SO ON!

The only one I care about is Rookie Blue. It sucks I have to wait a year to see it!

Wow , I am shocked at all the reality garbage,,, NOT . Slowly television as we use to know it has become seeing how we can get people to do stupid stuff . Any reality tv stuff is a pass in my books ,regardless the hype of them

I am with the others in supporting Rookie Blue. Otherwise ABC is just a reality TV network. I guess ABC wants to compete with MTV and Bravo instead of AMC, HBO, or CBS.

Rookie Blue is the show for me.

NO……..the only show that I’m interested in this line up is the second season of Rookie Blue…….the rest don’t interest me.

Mostly reality shows so this summer will be a good time to catch up on my reading. I will give hot zone a chance but I wish we had a new show that was not either a medical crime or leagle show.

I guess the only thing I’ll be watching is Rookie Blue, maybe I’ll take a look at Hot Zone, the rest is just more of the same garbage every other TV channel is producing.