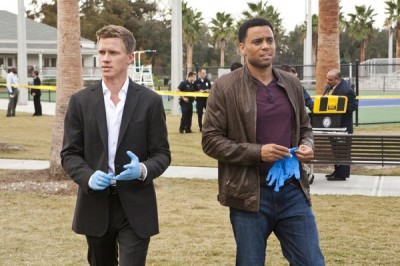 As expected, USA Network has cancelled Common Law after one season and 12 episodes. There won’t be a second season.

Common Law revolves around a pair of LAPD detectives who successfully solve crimes together but can’t stand each other. As a result, their boss sentences them to attend couples therapy. The cast includes Warren Kole, Michael Ealy, Jack McGee, Sonya Walger, Elizabeth Chomko, Alicia Coppola, Nora Zehetner, and Reed Diamond.

The series debuted on May 11th and ran on Friday nights through August 10th. The ratings were poor from the start, even by the cable channel’s standards. The season averaged a 0.6 demo rating with 2.12 million viewers.

In September, it was rumored that Common Law was essentially cancelled. The showrunner had taken a job on CBS’ Elementary and the cast’s contracts had all expired. Word was that the sets had already been dismantled as well.

What do you think? Are you sorry to hear that there won’t be a second season for Common Law?

I really enjoyed this show and was looking forward to the next season. I am very disappointed.

I loved the show. Would like to see it come back. This show was not a lot of killing or blood. Please come back.

I loved this show. I thought it was coming back. I just decided today to check to see why it had not return when all the other shows had come back by July. Anyone heard anything about the possibility of seeing the reruns?

I looked forward to this show every week, even tho I watched it on my phone. I had heard that it was cancelled, but I was hopeful anyway. Everything about it fit nicely, except Friday nights, apparently. Never a great night for tv … certainly not a great night to start a show you’d like to keep around, anyway. 🙁 Boo.

We loved the show Common Law & would love to have seen it continue!! According to reviews & comments online, 100% of people LOVED it & there was no good reason to cancel it!! I hope they consider continuing additional seasons & episodes!! EVERYBODY that watched it, LOVE it!!! It needed a chance to allow people to get to know the show instead of judging & making rash decisions from the beginning!! Everybody that seen it, LOVED IT & it should be continued with additional seasons IMMEDIATELY!! It was a GREAT show & that’s hard to come by these days!!

I loved this show. Was waiting for it’s return. When shows are kept on about kids sleeping with pigs, who has the fattest butt, etc., why on earth do they cancel a GOOD, decent show that where we can laugh?

My husband and I loved this show. It was hilarious!!! I hope the series gets picked up by another network.

Loved the show, actually funny and well written. The other crap still running.

I’m very sorry to see the show end. It was very good and funny. I thought they complimented each other very well. I believe that networks should really spend time moving shows to different nights to see how well they will fare

Highly disappointed!! The script was well written, actors’ performance superb! They really did click together. The concept was a good one. Fine acting, fine writing, fine concept – too bad it wasn’t given another chance on a more television-watched night of the week before pulling the plug. Some of us out here really enjoyed the show.

HELL YA I’m disappointed I don’t know why there were low ratings. I loved that show I thought the characters has fantastic chemistry! Honestly busy people dont watch TV anymore they watch things on Netflix, Hulu etc when they have the time. Do the powers that be take that under consideration when they take good shows off the air?

I can’t believe it. common law was one of my favorite shows but I should have known when a show is great they was going to take it off air. It had everything. still can’t believe its cancelled

I can’t believe the show has been cancelled. It had action and comedy along with a great looking cast. I was really looking forward to the beginning of another season.

USA just lost another family of viewers… cant believe Common Law was cancelled. great show.. whoever decides the programming needs to rethink what they are doing. Much worse shows are still playing and continually get renewed for some reason… just dont understand… thanks for ANOTHER disappointment USA