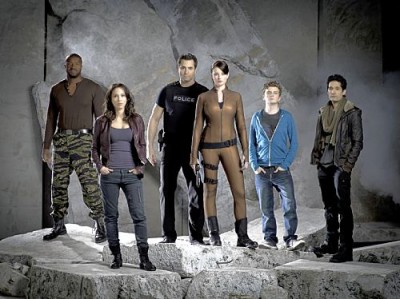 TV show description:
In this police drama, Kiera Cameron (Rachel Nichols) is a Protector; a regular cop from Vancouver in the year 2077. Through a series of events, she finds herself trapped in present day — alone and a stranger in a strange land. To make matters worse, there are eight of the most ruthless criminals from the future, known as Liber8, loose in the city.

Thankfully, through the use of her CMR (cellular memory recall — a futuristic liquid chip technology implanted in her brain), Kiera can connect with Alec Sadler (Erik Knudsen), a seventeen-year-old tech genius. Using his prototype 2012 wireless technology, Alec is able to help Kiera track the Liber8 agents and provide her with information to help her operate in our time.

In order to track the terrorists down and keep them from changing the past (and presumably future), Kiera joins the 2012 Vancouver Police Department. Thanks to Alec’s help, she’s able to do this without the necessary credentials. Kiera knows that the eight terrorists will resort to criminal activity to further their goals of taking down the corporations that will one day rule the world.

Partnered up with Detective Carlos Fonnegra (Victor Webster) of the Special Investigations Unit, Kiera positions herself perfectly to hear about Liber8’s activities and to hopefully intervene.

Like Kiera, Carlos is also a cop with a passion for justice. They are from totally opposite ends of the ideological spectrum however. Carlos believes in justice for the individual while Kiera’s 2077 sensibility has brought her to believe in justice for corporations.

Kiera has been brought up and trained to always depend on her technology. She finds that her relationship with Carlos has her learning to listen to her gut for the first time.

Series Finale:
Episode #42 — Final Hour
Kiera and Alec risk everything to stop the future soldiers and their devastating plan. Kellog, despite a loose alliance with Kiera, has plans of his own. All factions clash violently in order to determine which path the future will take.
First aired: October 16, 2015.

What do you think? Do you like the Continuum TV series? Do you think it should have ended or been renewed for a fifth season?

Definately deserves a season 5 and 6 .. ending was poor.
Sad to watch a ending that was not a compliment to the rest of the series.
Dissapointing ..

Omg.. could not believe this series is so well written only to end with a simple poor ending.. bring it back for a few seasons..
Would love to see this get a major grand finale’ rather than a low budget fob off.

Well just finished the series 1 to 4 continuum thought there could have been a lot more to it than that. Definitely could and should bring it back there would be so many ways to do it !!!

I want the series to come back as more seasons I believe it still has more questions please bring it back.

I’m new to Continuum after having just watched it all on Netflix. It was a bittersweet ending. I think Kiera at some level must have known she could never return to her own future but she was desperate enough to lie to herself. The fourth season was bit ropey as regards writing but since they only had six episodes to tie everything up it can be forgiven. I’m not sure how they could continue it even if they were given the green light or a direct to Netflix option. But at least the story came to an end and she… Read more »

I understand the ending and why it had to be that way, but to me, evil won over good. Kiera was the only one in the show that from the start was trying to do the right thing. The brothers had screw up the world and made sure to take care of themselves if they could straighten up the world. Yes they were trying to make right what they did but at the same time knowing that who ever went back, were screwed whether their plan worked or not. Again evil wins!! My view right or wrong!

So sorry to see the end of Continuum. I wish our Kiera had a better personal ending. Ah, the paradox of time travel.

corrected version: I had lobbied for series 4 so that I am really glad we got it even though it was the end. I thought the ending of episode 6 (the finale) was sad: that Keira could only see her son with her “other time-line” self, but in the context of the show, that did make logical sense: Sam would have to be born to the Keira that evolved in that new time-line created by young Alec, Julian and Kagame back in 2015 onwards. It was really too bad the show was cancelled. It was one of the best shows… Read more »

Have been watching this on Netflix…..I love it….I can’t wait to get home every night to watch an episode or two. They only have the first three seasons cataloged…so I thought the show ALREADY had been cancelled, and couldn’t understand why. I still have 5 episodes of season 3 to watch and now the few of season for BEFORE FRIDAY AT 11PM when the finale airs in my area…. I hope the network reconsiders the cancellation, but takes everyone comments about lost themes and minor plot confusion into consideration if they continue.

I hated the ending, the little twist was a surprise and kind of sad. I enjoyed the series and others on SyFy, Try Dark Matters and Killjoys, kind of same genre.

It a great show keep it going

This is an entertaining show and one I would continue to watch as long as it stays on the air. However, the storyline has become severely muddled, the on again off again Keira drama plotline about getting her back to her own time has become very well worn and not particularly useful in moving the story forward. With only one episode left it’s going to be interesting to see how, or if, the writers tie everything up. I have a feeling that the final solution will be to keep everything open ended, i.e. no answer about whether anything that Keira… Read more »

Regrettably, I agree with you Bill but I hope you are wrong.

The show’s entertaining but its central theme seems to have gotten seriously lost in episodic, repetitive plot lines and solve-this-case scenarios. There’s no progress or real development; just a time loop that’s played over and over again in variations of a central theme that’s now vague and half-forgotten.

Love this show. The characters and storyline should be continued.

This is A Good Show there are plenty of bad shows you can cancel !

Why cancel a good show with plenty of action & imagination¿