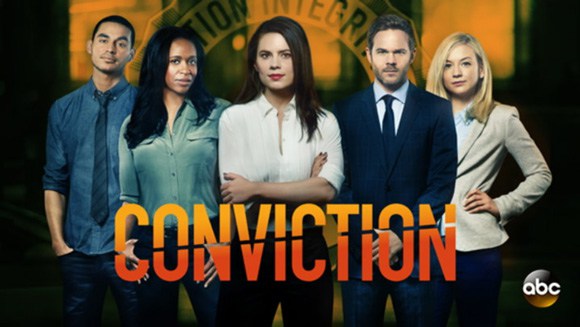 Can Hayley Atwell find a hit TV series? Has the Conviction TV show been cancelled or renewed for a second season on ABC? The television vulture is watching for the latest cancellation and renewal news and this page has been created as a dedicated place to track the status of season two. You can bookmark this page or subscribe for the latest updates. Remember, the television vulture is watching your shows. Are you?

Airing on the ABC television network, Conviction follows attorney Hayes Morrison (Hayley Atwell), the daughter of a former President, as she gets “blackmailed” into joining the Conviction Integrity Unit. It’s an NYC department that re-examines cases when there is suspicion of wrongful conviction. The rest of the cast includes Eddie Cahill, Shawn Ashmore, Merrin Dungey, Emily Kinney, Manny Montana, and Daniel Franzese.

Season one is averaging a 0.65 rating in the 18-49 demographic with 3.58 million viewers. Compare its performance against the other ABC TV shows we’re tracking.

Hayley Atwell was charming in Marvel’s Agent Carter but the ratings were lousy and the series was cancelled. I think the network was hoping that her fans would help make Conviction a hit. Unfortunately, the ratings were low to start and they’ve gotten much worse. ABC didn’t order any more episodes beyond the initial 13 episode order. That, combined with the terrible ratings, means that it’s very doubtful that Conviction will survive to see a second season. Unfortunately, we may not get official word from ABC until May. My condolences. Better luck next time, Ms. Atwell.
5/12 update: ABC has officially cancelled Conviction after one season. Details here.

What do you think? Did you watch Conviction on ABC? Do you think that ABC should have given this show more time or renewed it for a second season?

I really like Conviction. It has places to go and with cases, it can keep going. They gave quantico a second season when we thought they wouldn’t and it’s so horrible I stopped watching it in November.

I’m really getting tired of shows I like getting cancelled in lieu of mediocre crap. Already losing shows this season. If this keeps up I’ll get rid of cable and watch Netflix

Exactly what i was thinking. Especially with ABC shows so if this does end up being cancelled I’m definitely not watching anymore TV shows that ABC has to offer. 🙁

Just finshed watching last episode of conviction surely they cant let the series end like this!!!I absolutely LOVE the show.I love this show.. I was expecting the TV drama to continue.I find it VERY UNIQUE and I would love to futher discover new cases and the story behind each character. This series, like no other, gives me inspiration and ideas in pursuing acting dream as I learn by observing the AMAZING performances by the whole cast So PLEASE, give CONVICTION a CHANCE that certainly deserves. We need this REMARKABLE work.

Just finshed watching last episode of conviction surely they cant let the series end like this!!! It is a absolutely fantastic show very refreshing TV in a long time dont understand why its being cancelled the cast is fantastic and the characters really gel together I hate it when abc do this and dont give shows a chance dont they know that sometimes it can take viewers half or to a end of a season to get hooked!!!! I myself will be very sad to see the end of this great TV show!!!

I hope that it is renewed. I hardly watch anything on television but I love this show.

This show is really good I hope they renew it

I absolutely LOVE the show. “CONVICTION” STOLE MY MIND AND HEART Every episode is PERFECT – the performances, the cases, the mysteries and discoveries, the script is brilliant, the soundtrack fits prettily, the whole story is exquisite. I find it VERY UNIQUE and I would love to futher discover new cases and the story behind each character. This series, like no other, gives me inspiration and ideas in pursuing acting dream as I learn by observing the AMAZING performances by the whole cast So PLEASE, give CONVICTION a CHANCE that certainly deserves. We need this REMARKABLE work.

Why does ABC not give a program/series chance to establish itself and grow and develop a following. There is too much shortermism. They have historically dumped series’s before they have had chance to develop. Don’t make the same mistake with Conviction!

Totally agree … Too many disappear after one season ….but yet we allow crap stay & stay & stay…..this show could have really gone somewhere & continued on with good writers…I graded this better than csi Miami….way better context,…

I think that Conviction is a great show. I have enjoyed every episode!! All of the actors are good. I hope it is renewed!!!

I hope another television station will pick it up and air the television show. It is a good show and needs some support. ABC is always ready to cancel a show before it develops and/or finds an audience or give the writers a chance to fix the problems. I believe if the show was on-going like a good drama/soap opera, on at a different time, and they rewrite the script about only giving the team five days (I thought was ridiculous) to solve whether a wrong conviction was committed the show would get higher ratings. Also, put more action into… Read more »

Worth way more than just a second season….

I enjoy this show! Hope another of my favorite shows doesn’t get the axe….kinda sad if it goes

I hope Conviction is not cancelled. Great chemistry between Hayes and Wallace!❤

I love this show and does my sister and husband. Why does anything worthwhile disappear.

I love the show and wish it’d be renewed!!! Seems like television channels want to cancel the good shows and keep the stupid reality shows..that pisses me off. Hope conviction gets renewed tho!!!

I love Hayley Atwell and will watch ANYTHING she is in!! I miss Agent Carter and love Conviction and the characters on there including Hayley and Emily Kinny! I will be devastated if they canceled!!

I really like this show. Me and my friends get together every week to watch it together. It’s the only night we get together. No kids and no husbands to interrupt us. Just friends, junk food, a few drinks if we choose and a great show we all love.

I love this show.. I was expecting the TV drama to continue. Nowadays the networks are cancelling shows before they establish a following. I would love to see what’s next for Season 2.