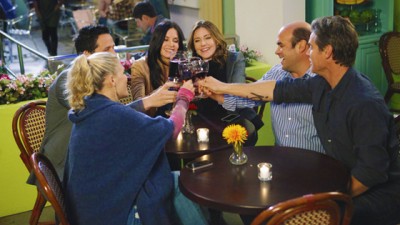 Though Cougar Town has been performing very poorly this season, the show may go on if ABC cancels it. Talks are currently underway with TBS to possibly take over the series.

As I noted here, the ratings for Cougar Town have been so bad that ABC is sure to cancel it later this month — unless they want to keep it alive so it can amass enough installments for a syndication package. The problem is that there will only be 61 episodes by the end of season three and even a full fourth season would only bring the tally to 83 installments.

According to Deadline, ABC Studios is in discussions with TBS to potentially take over Cougar Town for two seasons of 15 episodes each. The article notes that conversations are still in the preliminary stages and transitioning a broadcast series to cable can be tricky deal-wise.

A rep for Turner Entertainment Networks declined to get into specifics but said, “Should the show become available, TEN looks at all opportunities presented to us that fit our brand.”

If the scenario works out, this will be the second Bill Lawrence TV show that’s survived a cancellation and switched channels.

After being cancelled by NBC, ABC Studios’ Scrubs moved to ABC for two final (and low-rated) seasons to increase the episode tally for syndication. Turner’s TNT picked up Southland after NBC dumped it and the cop drama has performed well enough to be renewed for a fifth season on cable.

What do you think? Would you follow Cougar Town if it were picked up by TBS? Or, should the declining ratings be taken as a sign that it’s time to cancel the show?

Save it, because show amazing, rating suck!!! abc two, Penny Can Rules!!!!

I’M YELLING, BECAUSE THIS IS MY FAVORITE SHOW!!! PLEASE SAVE IT, ID FOLLOW THEM TO TELEMUNDO IF I HAD TO.