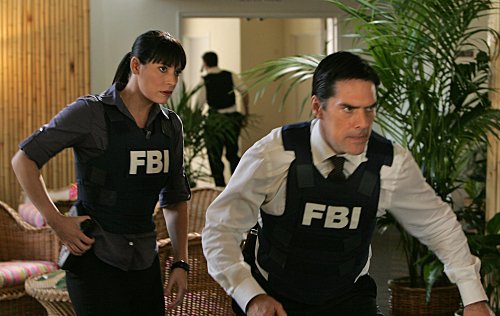 As reported earlier today, Criminal Minds has been renewed for a ninth season on CBS. Here’s their official announcement:

What do you think? Are you glad that Criminal Minds was renewed for a ninth season? How long should the series continue?

I would love it if Prentiss would return! She was excellent. Triplehorn is blah.

I love criminal minds, always have. I would love to see more on the characters personal lives but still my favorite show. There aren’t enough good shows on tv so please don’t take the few we have left.

When you are on a good thing stick to it. Criminal Minds is a good thing. Thank you for renewing it.

So glad that it’s been renewed. I just saw Esai Morales on Arsenio Hall and he says he’s going to be on the series this season and that will be great. Criminal Minds is the #1 show on my weekly “have to watch” list. As long as the characters will stay, I think it should continue to be renewed. Was so glad that Mandy Patinkin left since he spoiled the show for me and Joe Mantegna is perfect and works so well with the rest of the cast!!

I am so happy that my favorite show is returning for another season ! Hope it continues I watch the old ones and look forward to the new ones

I’m so happy Criminal Minds is being renewed for another season! I hope it can reach for a season 10! I don’t want it to go any more than that though. (There kinda starting to jump the shark) All good things must come to an end.

I cannot wait for season nine to air. The best TV drama on Wrdnesday I always looked forward to Wednesdays night.

One of the best dramas! I love CM and all of its cast and glad to hear that Esai Morales will be joining them! Can’t wait to see what CM has in store for us this season.

It is the best show on TV. The cast is superb and I love them all. Thanks for keeping them together, especially Thomas Gibson. Cannot imagine CM without Hotch being in charge.

i have loved this show for the last 6 years and watch reruns this is the best cast yet and the season finale was great . the cast works so well together which makes it the best show thank you for another year i cant imagine weds nights without it

Criminal Minds should go on for at least as long as law & order did!! I will never get tired of my favorite show!!

This is my favorite show along with NCIS. If this would not have been renewed, it would have been tragic. It should be on FOREVER.

I am so very happy that Criminal Minds has been renewed. It is so engaging & so are the stars. I love them all!

I am VERY VERY happy Criminal Minds has been renewed again for the 2013-2014 Season! Thank you!

I think Criminal Minds deserves to be renewed for the 2013-14 season. It’s one of the best dramas on TV!