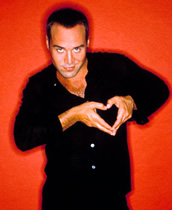 It’s not often that a series gets a second chance but that’s just what’s happening with the cult favorite show Cupid.

Cupid debuted on September 26, 1998 on ABC. The series starred Jeremy Piven as Trevor Hale, a man who believes that he is the mythological Cupid. As punishment for his arrogance, he’s been sent to Earth by Zeus to connect 100 couples without using his powers. Not surprisingly, he finds himself in an institution and is put under the care of Chicago psychologist Dr. Claire Allen (Paula Marshall). The state mental health board agrees to Trevor’s release providing that Claire continue to monitor his progress, a professional situation made all the more difficult when the two begin to fall for one another.

Cupid was one of the early projects by writer Rob Thomas who went on to create the very popular (yet ratings-challenged) Veronica Mars. Though Cupid was cancelled after only 15 episodes (one of those left unaired), the series attracted a small but devoted group of fans. They’re likely going to be very happy to hear that Cupid is coming back, albeit in a new form.

As part of a previously announced development deal, ABC has now asked Thomas to develop a new version of Cupid. The creator told Variety, “For the last couple years, I’ve been talking to ABC about how to do an anthological romantic comedy ala Cupid or Love Boat. We kept beating around ideas and kept coming back to Cupid as the best of the group. So they said to me, ‘Why not go back and do Cupid again?”

Thomas was “shocked” but by the suggestion. He continued, “I’m getting a chance to do what writers never get the chance to do, which is to go back and try” to improve a work. While Thomas will rewrite the pilot, the premise will remain virtually unchanged. “I’m not going to reinvent it. What they’re buying is the show.”

Minor changes in store will include the casting. Emmy-winner Piven is busy with the Entourage series so he and the rest of the original cast won’t likely be taking part. The new series’ main title sequence will communicate the show’s premise so that Thomas won’t have to re-explain it within the episodes. The series local will also change — from the windy city to Los Angeles, in hopes of doing some high-profile stunt casting. Thomas shares, “The plan is to try to hook some really good guest stars every week.”

Though Cupid wasn’t a ratings success the first time around, Thomas feels the time is right for a revisit. “The zeitgeist is better for the show now, and ABC is a much better network for it now. They’ve got a lot of shows that could lead into it.”

For the original series, Thomas admits that he hadn’t fully decided if Trevor was indeed the mythological character. Though he’s not sharing secrets this time around, Thomas says that, if the new Cupid sticks around long enough, viewers won’t be left hanging. “If we make it into syndication, this time I promise that I’ll answer the question.” Stay tuned!

hello, my name is Genevieve and I’m french. Lucky for me that this show went across the sea to a streaming website. Sorry, didn’t have the choice because a foolish production has decided to stop this great serie. You know what, you are making a terible mistake. People are tired with series talking about murders, investigations, illness… You are the ones on this segment of pretty shows, treating about love with humour and sens, and you blow it on fire? are you crazy or what. France would have been very happy to see this show. too bad!!!